Mike Scott went into the 2014 NBA season with zero guarantees but emerged as a key part of the Atlanta Hawks' rotation and was rewarded this summer with a three-year deal worth a reported $10 million.

After seeing inconsistent playing time as a rookie, Scott emerged during his second season in the NBA. He dropped substantial weight and improved his offensive game by extending what was already a solid pick and pop game out to the three-point line. He finished the season as Atlanta's top scorer off the bench.

At 6-8, Scott isn't as big as a natural power forward but he does have pretty good strength around the basket. He has a quick release and has shown the ability to get his shot off in the paint around larger defenders. His improving perimeter game gives him an advantage over more traditional power forwards who are aren't as comfortable having to defend to the three-point line.

As a rookie Scott converted 47.6 percent of his field goals while attempting just one three-pointer the entire season. In 2014, Scott hoisted 200 three-point attempts of which he made 31 percent. His overall shooting percentage went up however to 47.9 percent.

Scott's shot chart from last season shows his prowess from mid-range and if he can continue to improve his three-point stroke he will be an even better fit for the types of things that Mike Budenholzer is looking to do offensively. 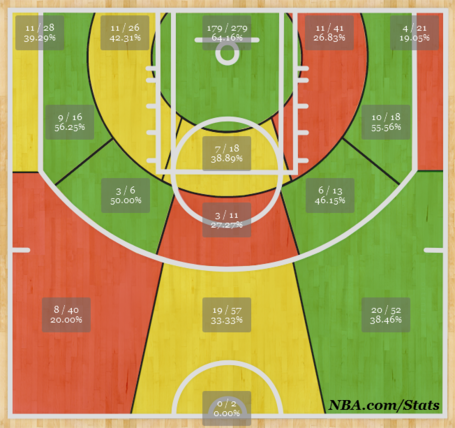 Another area that Scott uses his size and speed to his advantage is in transition. He's an excellent finisher at the rim and is one of the best on the roster and sprinting baseline to baseline which sometimes leads to easy baskets.

Whether you buy in to the hot-hand theory or not, Scott has also shown the ability to be explosive on the offensive end and get points in bunches. He knocked down five three-pointers in rapid succession against Indiana in Game 5 and helped send the Hawks back to Atlanta with a 3-2 edge in the series.

While Scott came into his own as an offensive player last season, he still needs work to become an average defender. Despite being at a size disadvantage in a lot of post up opportunities, Scott doesn't do that bad in one-on-one situations. Its away from the ball where he struggles. Per NBA.com, he finished the 2014 season with a defensive rating of 107.6 which was 12th on the team. He added a net rating of -6.3 for the season. So as good as he was offensively their is still plenty of room for improvement.

The good news is that many of Scott's defensive breakdowns are simply positioning issues. Those can be remedied in time with more experience. Here Scott floats a little too far into help position. Luis Scola actually passed up a good look on the first pass as Scott recovered late. Scola elects to move the ball, slips the pick and roll and Scott can't recover to bother the jump shot.

Different part of the floor but almost an identical situation to the first video. Scola probably could have taken a shot early in the possession but Scott recovers. He swings the ball to the wing and Scott goes too far into help position and can't recover to Scola in time to prevent the jump shot.

Its worth mentioning that Atlanta's bigs get forced into help position a lot and that is where the additions of Thabo Sefolosha and Kent Bazemore could pay off. On this play, Shelvin Mack did a pretty good job of cutting off the baseline but many times throughout the season Atlanta would have needed Scott to have stopped this drive.

Here Scott once again goes deep into help position and knowing that Scola has played well offensively tries to close out quickly but is out of control. Scola gives him the head fake and then has an easy drive to the basket.

While some of this is bad defensive fundamentals it can be corrected with time and with more defensive talent being on the floor. Scott has shown a solid a work ethic in his two seasons in the NBA and there is no reason to believe that he can't get better defensively while also maintaining growth on the offensive end. In many ways he has become the face of the organization's player development model.

Heading into the offseason there was a lot of debate over what kinds of offers Scott might command in free agency. It was a dry market for restricted free agents and a lot of teams had to figure that Atlanta would simply match any offer sheet that wasn't a clear overpay. With a team option on the final year of his deal, the Hawks get a good young player in Scott for a good price while also maintaining flexibility. Scott may not ever develop into a starter at the NBA level but he has shown that he can be a valuable contributor off the bench.