NBA training camp is right around the corner and we continue our look at the Atlanta Hawks roster with a closer look at the center position.

We continue our preview of the Atlanta Hawks roster for the upcoming season with a focus on the center position. Atlanta suffered through an injury plagued season in 2014 and the center position was hit the hardest. Al Horford appeared in just 29 games before suffering a torn pectoral muscle for the second time in three season. An ankle injury limited Pero Antic to 50 games while Gustavo Ayon lasted for just 26 games due to ankle and shoulder injuries.

The group looks similar this season with Horford back healthy along with the return of Antic and Brand. Mike Muscala was brought over early from Spain at the end of last season to help provide depth and he will replace Ayon this season.

When Horford went down last season, the Hawks were third in the Eastern Conference and really hadn't hit their stride under new coach Mike Budenholzer. Horford is expected to be ready for the start of training camp next week and once again be the focal point of the game plan at both ends of the floor. More than that, he was the unquestioned leader of the team and getting him back will be a huge shot in the arm.

At the time of his injury, Horford was on his way to the best season of his career. He was averaging a career best 18.6 points per game on 57 percent shooting. His effective field goal percentage also had risen to 57 percent and his true shooting percentage topped out at 59 percent. Horford was able to maintain his efficiency despite an increase in usage.

Horford's shot chart illustrates the kind of shooting season he was having and shows how he was a vital piece of Atlanta's pick and roll game. 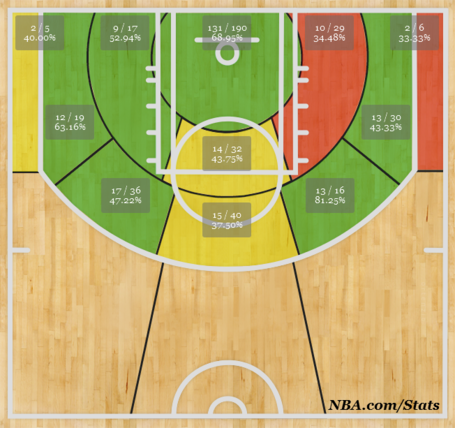 When Horford went down it had an adverse effect on the rest of the team. Suddenly Jeff Teague didn't have the same open lanes to drive, Kyle Korver suddenly didn't have as much space and Paul Millsap drew more attention from opposing defenses. Atlanta eventually adjusted but their efficiency suffered as they tried to offset the loss of Horford with more attempts from three-point range.

While the added three-point shooting was often a band aid for the offense, there was no such ointment for the defense. Atlanta wasn't great with Horford in the lineup but they were much worse without him. Adding Horford back to the lineup along with the additions of additional wing defenders in Kent Bazemore and Thabo Sefolosha could have Atlanta's defensive numbers finally headed back in the right direction.

Lets be clear about one thing. When the Hawks signed Pero Antic in the summer of 2013 they never anticipated having to rely on him as the team's starter. That was exactly the situation they found themselves in once Horford went down. Antic was a rookie in NBA terms, but at 32 he was hardly a stranger to the game. He struggled at times with the speed of the NBA but adjusted reasonably well.

An ankle injury in January ultimately cost him a month of action and he never was quite the same once he came back. He gutted his way through and was a big part of the game plan in the Hawks upset bid against the Pacers in the first round of the playoffs but looked like he had run out of gas due to the long NBA season.

Antic took the summer off to heal up and prepare and he should once again play a prominent role behind Horford. Antic played a big part in Budenholzer's space the floor game plan and was routinely deployed when the Hawks looked to draw a big man out of the paint. Budenholzer will likely look to limit Antic's minutes along with Elton Brand. That in theory would keep him healthy and ready over the course of the full season.

The return of Brand adds a much needed big body to the rotation along with a wealth of veteran experience. Somewhat ironically, Brand was Atlanta's most healthy center last season appearing in 73 games and at one point logging major minutes as the Hawks' only healthy option. That is a testament to the hard work Brand puts in to maintain his body during the offseason.

Like Antic, Atlanta won't want to rely on Brand as much this season as last. However, together they could perform as a successful platoon depending on the opposing matchups. Brand was solid offensively in 2014 and fits in nicely with Atlanta's pick and roll game. He has a nice face up jumper although he doesn't have the range that the other center options on the roster have.

His defensive metrics have slipped a bit over the last couple of seasons but the Hawks as a whole struggled defensively, particularly in the second half.  He also looked like he was worn down some in the playoffs after logging over 1,400 minutes.

Brand will have the opportunity to make an impact on the court but his value in the locker room remains high. That is particularly the case given the events of this summer that have rocked the organization.

Muscala had a most interesting rookie season in 2014. After getting drafted in the second round and going to summer league with the Hawks, he began his pro career overseas in Spain. Once injuries began to pile up, Atlanta successfully negotiated Muscala's buyout and brought him over for the final part of the season.

He predictably struggled at times as a rookie but that was to be expected. Still he is an intriguing prospect and showed promise in Las Vegas at Summer League. Muscala possesses a solid and improving perimeter game which fits nicely into Budenholzer's offense. He is active offensively and showed the ability to put the ball on the floor and get to the basket this summer.

Like most young bigs, Muscala needs to add strength and bulk to be able to handle the rigors of playing in the paint in the NBA. By all accounts he has a solid work ethic and it will be interesting to watch him further develop in Atlanta's player development system.

The success of this unit and the Hawks centers on the health of Horford. There is enough depth behind him to get by for a short period but Atlanta will ultimately struggle should he be down for any extended period. Budenholzer showed that he wasn't afraid to go with different combinations on the floor and wasn't afraid to use small lineups. Rookie Adreian Payne was drafted as a power forward but has good length and could eventually see some time at center.