Elton Brand made everyone wait, but he will return for his 16th season in the NBA. Brand agreed to return to the Hawks on a one-year deal earlier this month and was officially announced by the team on Tuesday. He figures to once again bring a ton of experience and professionalism to the locker room as well as an adequate backup option at the center position.

Like all of Atlanta's reserve centers, Brand's role changed significantly last season once Al Horford went down with a torn pectoral muscle. He ended up averaging 19.4 minutes over 73 games which also included 15 starts. At one point last season, Brand found himself as the team's only available option at center thanks to injuries to Horford, Pero Antic and Gustavo Ayon. From February 18 through March 2, Brand played more than 30 minutes in six out of seven games including 42 minutes in a win over New York. That was a lot of strain on a 15-year veteran who was 35 years old at the time.

With a little luck, the Hawks won't have to lean quite as hard on Brand this season thanks to the return of Horford. We will have to see how Mike Budenholzer plays it during the preseason but Brand figures to share the backup role with Pero Antic while second year big man Mike Muscala is also in the picture.

Besides leadership, the Hawks will need Brand to be a defensive presence in the paint again this season. He is the most traditional of all of Atlanta's bigs. At 6-foot-9 he gives away a few inches in the paint but makes up for that with a large wingspan and good instincts.

Brand finished second on the team behind Horford in blocks last season, averaging 1.2 per game. He often doesn't look like your prototypical rim defender, but his long arms and solid timing keep him effective as Lance Stephenson found out on this play from last season's playoffs.

Here Brand is matched up against Al Jefferson. On this one play he defends the post and then rotates out to help contain Ramon Sessions in the pick and roll.

Brand's game has evolved over the course of his career and he has developed an excellent face up game to go along with adequate post play. As you can see from his shot chart, he was dangerous in the area just outside the paint while remaining league average at the rim. 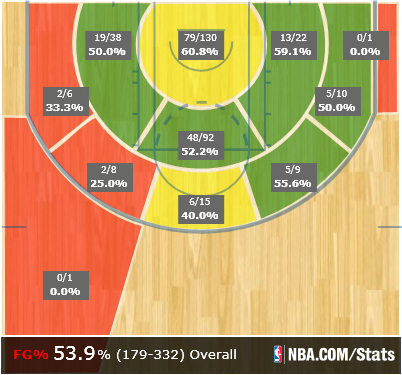 Brand doesn't possess the three-point range that Antic does, but the Hawks use him in similar fashion on the offensive end from time to time. His solid shooting from outside the paint makes it tough on big defenders who often aren't accustomed to leaving the paint on defense.

Here Brand's defender slides too deep into help position to help contain the pick and roll. Brand rolls to the free-throw line where he receives the pass and knocks down the jumper before the help defender can arrive.

Same situation as the one above, but this time Larry Sanders does a decent job of recovering defensively. Brand's long arms not only help him on the defensive end of the floor, but they also allow him to get his shot off over defenders in tight places.

When you think of Elton Brand, the word "professional" should immediately come to mind. His presence in the locker room alone makes him a worthy addition to the roster but, as he showed last year, he still has enough in the tank to play back up minutes at center. If Horford and Antic can both stay healthy, then Budenholzer will have the luxury of limiting Brand's minutes and using him depending on the matchup. If not, Brand will be there to once again answer Budenholzer's call.