Once Kent Bazemore agreed to a two-year deal with the Atlanta Hawks, it didn't take long for the comparisons to DeMarre Carroll to begin. Carroll turned down more money in the summer of 2013 to sign with the Hawks in large part due to the promise of a bigger role within the team. He responded with a career-best season in his first as a starter.

Bazemore comes to Atlanta with a similar track record having spent time in Golden State and Los Angeles. He isn't slated to start for the Hawks the way Carroll was, but he will have ample opportunities to make an impact on the court. That was something that was unavailable to him in Golden State and, although he did get to showcase his talents a bit with the Lakers, that came while playing for a bad team who pretty much mailed it in down the stretch.

The expectations will be higher in Atlanta as the Hawks again figure to play some part in the Eastern Conference playoff picture. Atlanta entered the offseason with the goal of adding size and more defensive talent to its wing positions. Bazemore figures to slot into some of the minutes vacated by the departure of Lou Williams. Still, with the addition of Thabo Sefolosha and a pretty well stocked backcourt, it remains to be seen how the rotation will play itself out.

When you look closer at Bazemore the first thing that jumps out at you is the athleticism. Bazemore is listed at 6-foot-5 by the team and he plays bigger than that thanks to a good wingspan and jumping ability.

This block by Bazemore from last January against the Hawks shows off some of his athletic tools. He closes on Carroll who has a big head start and denies him emphatically at the rim. On the slow motion replay check out just how high Bazemore's arm is about the rim.

Another thing that jumps out when watching video of Bazemore is how quickly he can transition from defense to offense. Here he gets a steal from the Pacers and finishes the play with a reverse dunk at the other end. He should add to Atlanta's transition game as he does a good job either leading the break or filling the wings while finishing at the rim. A terrifying thought for opposing defenses will be seeing Jeff Teague pushing the ball in the middle of the floor with Bazemore and Mike Scott filling the wings.

In a half court setting, Bazemore has tools to succeed in Atlanta's pick and roll game. He got to showcase some of those talents while playing for Mike D'Antoni and the Lakers last season. After averaging 6.1 minutes per game with the Warriors in 25 games last season, Bazemore was traded to the Lakers where he suddenly found himself in the rotation and often times in the starting lineup. He averaged 28 minutes a game with the Los Angeles and saw his numbers go up across the board.

Here is an example of a side pick and roll on the wing area. Bazemore uses the screen and then displays a quick first step to blow by Anthony Davis for the layup. With the Warriors, Bazemore shot 37 percent from the field but that number increased to 45 percent with the Warriors.

Here is another side pick-and-roll where Bazemore uses the screen and then makes a nice Eurostep move around Boston's Kelly Olynyk for the score.

On this pick and roll play, Bazemore gets the ball at the top of the key and then sizes up the defense. Notice the big defender who slides heavily to Bazemore's left. Seeing this, he declines the screen and explodes to the basket for another layup. Now this isn't exactly a good example of great defense on Boston's part but it illustrates the tools that Bazemore has to punish the defense when they are not in position.

After looking at these clips it is a little surprising that Bazemore was only about league average in converting at the rim. As you can see from his shot chart, he has a decent enough stroke from mid-range out to the three point line particularly on the right hand side of the floor. 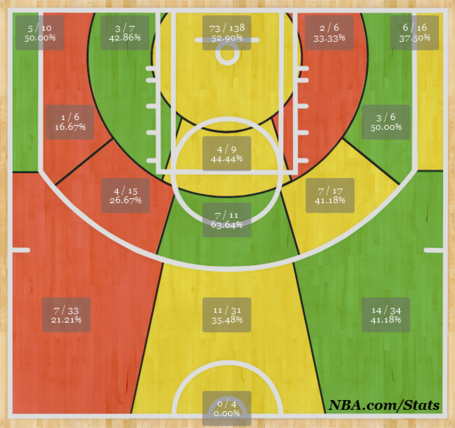 That is important and his shooting touch combined with his athleticism could lead to plenty of minutes with the Hawks particularly if Sefolosha's struggles offensively continue into this season. Mike Budenholzer regularly likes to deploy lineups where all five players are a threat from the perimeter. He isn't afraid to deploy some less than conventional combinations and Bazemore could likely see minutes across three positions in certain matchups.

Here Bazemore is off the ball as the Lakers feed the ball into Pau Gasol in the post. As Gasol makes his move, Bazemore's defender cheats into double team position. Bazemore slides along the arc to give Gasol a better passing angle, takes the pass and knocks down the three before the defense can react.

We touched a bit already on the athletic gifts Bazemore possesses and those gifts play a big part at the defensive end of the floor. I talked to Golden State of Mind writer Nate Parham earlier this summer about Bazemore and his time with the Warriors. Parham is a big fan and marveled at Bazemore's potential as a defender.

Bazemore's full potential was best on display during the second round of the 2013 playoffs when the Warriors used him against the San Antonio Spurs to guard Tony Parker -- he almost went from cult classic to Warriors playoff legend by making a go-ahead layup with 3.9 seconds left of Game 1. He has the length to bother smaller guards and fantastic instincts on the defensive end, as illustrated by his closeout on Manu Ginobili after a blown defensive rotation in that Game 1 loss. He's clearly capable of finding a role in the league as a defensive, energy player off the bench in the right situation.

On this play, Bazemore shows off some of those defensive tools as he jumps into the passing lane to steal an errant pass from Minnesota's J.J. Barea. As we talked about earlier, Bazemore turns defense into offense and finishes the transition opportunity with a dunk at the other end. He has the size and speed to be a good defender, now it is about getting the necessary playing time to further hone that ability.

As far as offseason acquisitions went for Atlanta it was a quiet summer with a lack of big name signings. However, I am excited about watching Bazemore this season because I think he can definitely take a leap when given his first real opportunity to have a role on what should be a good team. Under Budenholzer, player development has been one of the team's highest priorities and Bazemore was a name that they latched onto early in the free agency process and had to fight off a number of other teams to sign.

Something else that shouldn't be overlooked is the positive attitude that Bazemore will bring to the team. When talking to Parham, he described how good of a teammate Bazemore was no matter what his situation was with the Warriors.

"But basketball production aside, what I've always loved about Bazemore from covering him since 2012 summer league and at D-League games is that he truly savors every moment of the privilege of being on a NBA roster. There were weekends when he was asked to yo-yo between Golden State and Santa Cruz, eagerly playing the role of enthusiastic reserve on Golden State's bench and then embracing the opportunity to help his temporary teammates in Santa Cruz. And he does it all with a smile and humility that defies stereotypes about the modern pro athlete. He's an undrafted guy who takes pride in his craft and has had to work extremely hard to even get to the point where he's a desireable free agent. It's hard to imagine a better teammate in the NBA than Bazemore and that makes him someone I'll always root for no matter where the remainder of his career takes him."

That in many ways sounds just like the type of player that Budenholzer and his staff enjoy working with. They have talked countless times about competing night in and night out. Bazemore sounds like their type of competitor.