When training camp opened for the Atlanta Hawks in 2013 Shelvin Mack didn't appear to have a lot of job security. He had stuck with the team after initially signing a pair of 10-day contracts the previous season and had a less than spectacular stint with the team in the Las Vegas Summer League.

Mack went to camp with a non-guaranteed deal and appeared to be in a numbers game with Atlanta's point guard situation. The Hawks had just matched a four-year offer sheet for starter Jeff Teague and had spent a first round pick on Dennis Schröder. Veteran Royal Ivey was also in camp and Lou Williams was still battling his way back from a knee injury.

Mack was very comfortable with the underdog role however and won a spot on Atlanta's roster over Ivey. He began the season behind Schröder in the rotation but a 12 points, 12 assist performance in a road win over the Knicks in early November would springboard him into the rotation for pretty much the rest of the season.

Mack was able to give the Hawks stability last season which was something that Mike Budenholzer was looking for behind Teague. In turn, Mack will come to camp this fall with some security after signing a three-year deal with Atlanta over the summer.

The word "steady" might best describe Mack and that is exactly what he brings to the table for the Atlanta Hawks. His ability to take care of the basketball is what garnered him playing time behind Jeff Teague. To put that in perspective, Mack recorded 271 assists in 2014 while only turning the ball over 89 times. Here is a great example of his floor vision.

Here Mack pushed the ball up the court and takes advantage of a Knicks team that struggled defensively. He finds Ayon on a simple cut to the basket but puts the pass right on the money where his big man can take advantage.

Here is another example of Mack's playmaking ability. He declines the screen from Mike Scott and drives baseline into the paint where he draws multiple defenders before finding Paul Millsap on a nice wrap around pass for the layup.

Mack doesn't possess the elite speed and athleticism of his teammates Teague and Schröder but instead relies on strong fundamentals to get the job done offensively. He has a good understanding of what Atlanta is trying to do on offense and a solid shooting stroke once he finds an opening.

On this play, Mack takes the return pass from Millsap and has plenty of time to knock down the three in rhythm.

Due to the lack of athleticism, Mack has to pick and choose his spots when attacking the paint. He does a good job of using his body to help shield defenders and once he gets opposing guards on his hip, he's deceptively quick with his floater.

Once he established himself in Atlanta's rotation, he played at a high level through the first part of the season. Mack shot above 42 percent from the field during November, December and January before falling off post All-Star Break. Mack hit over 48 percent of his field goal attempts in January including 39 percent shooting from three-point range. 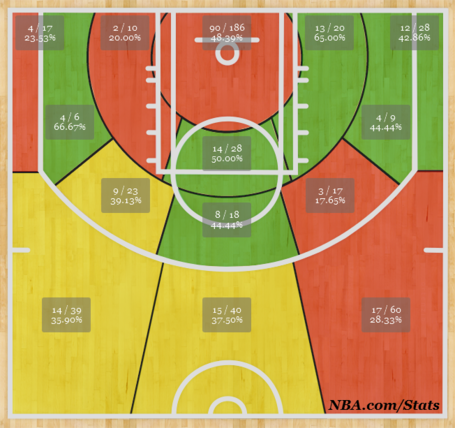 After the All-Star break, Mack's percentages dropped off to 40 percent from the field and just 30 percent from three-point range. Likewise, his defensive efficiency dropped off considerably as the season went along. That coincided with the Hawks' struggles during the second half of the season but it also came as Mack saw more and more time at shooting guard. His afore mentioned lack of athleticism hampers him when trying to chase opposing wings who often are bigger and better athletes.

Mack bounced back in the postseason with a solid performance against the Pacers. He finished with 20 points and five assists off the bench in Atlanta's Game 5 win in Indiana to give the Hawks a 3-2 edge in the series.

On some levels the decision to bring back Mack might cast doubt on the future of Schröder with the Hawks. I don't think it is to that point yet but it will be interesting to see how Mike Budenholzer uses his backcourt options this season. Lou Williams was traded to Toronto but the Hawks added free agents Kent Bazemore and Thabo Sefolosha to the mix this summer. Budenholzer is fond of the two point guard sets but there is a good chance that they will be deployed this season when the matchups are favorable rather than by necessity which was the case during the second half of the 2013 season.

One word to describe Mack might be "steady" but another would be "professional". That is what the Hawks are getting here in Mack as a guy that will play hard no matter the circumstance and whenever his number is called. He's a testament to Atlanta's player development model and its not surprised to see them reward him for his hard work. Atlanta will be betting on continued growth from Mack during the 2014-15 season.