2014 WNBA Playoffs: Dream must improve against Chicago's pick and roll

The Atlanta Dream struggled to contain Chicago's pick and roll game in Game 1 and must make adjustments for Game 2.

Share All sharing options for: 2014 WNBA Playoffs: Dream must improve against Chicago's pick and roll

The Atlanta Dream will try to stave off elimination on Sunday when they face the Chicago Sky in Game 2 of their Eastern Conference semifinals matchup. For the Dream to get a victory, they are going to have to do a much better job against Chicago's pick and roll game.

In Game 1, Chicago gave a number of pick and roll looks to Atlanta with varying degrees of success. The Dream's game plan appeared to be to crowd Sky center Sylvia Fowles and Chicago did a great job of playing off of that. The attention Atlanta gave to Fowles opened up a number of looks for players like Elena Delle Donne, Epiphanny Prince and Courtney Vandersloot.

Vandersloot's game-winning jumper with 20.9 seconds remaining was set up off of the pick and roll and highlights the challenge that the Dream will face on Sunday. 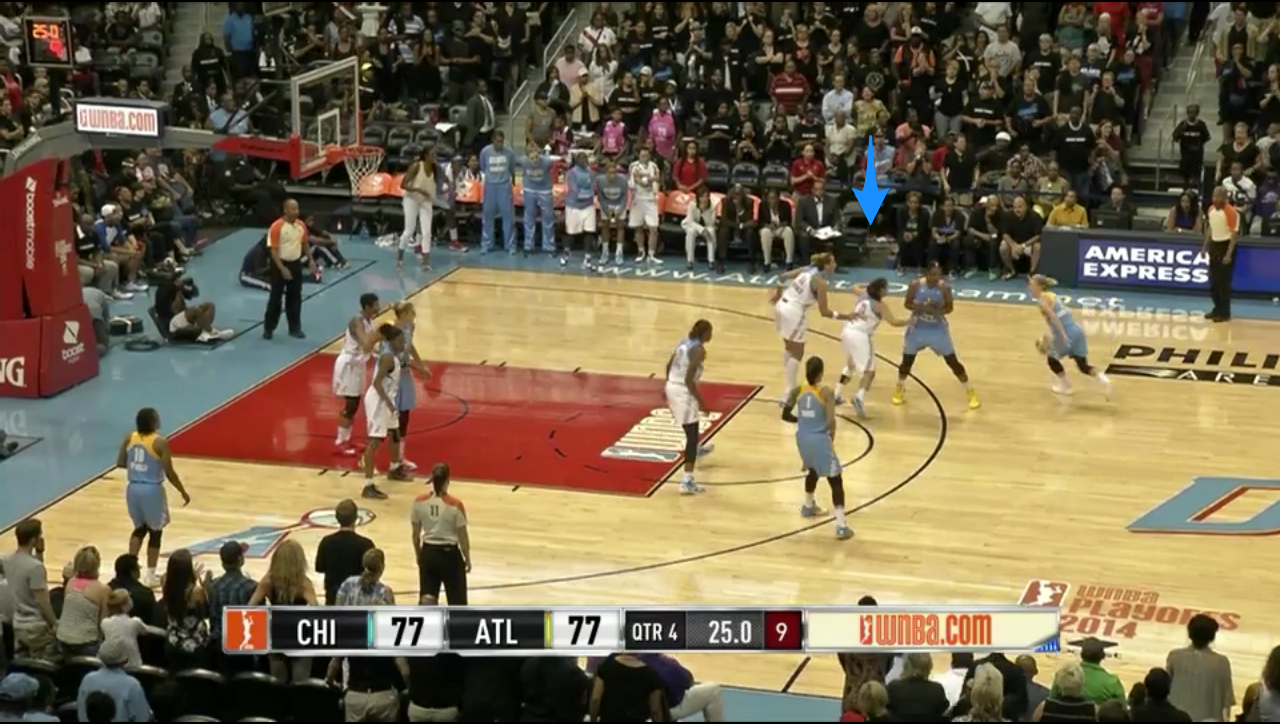 On the initial setup, Atlanta's Shoni Schimmel does a good job at going under Fowles screen and picks up Vandersloot on the other side. 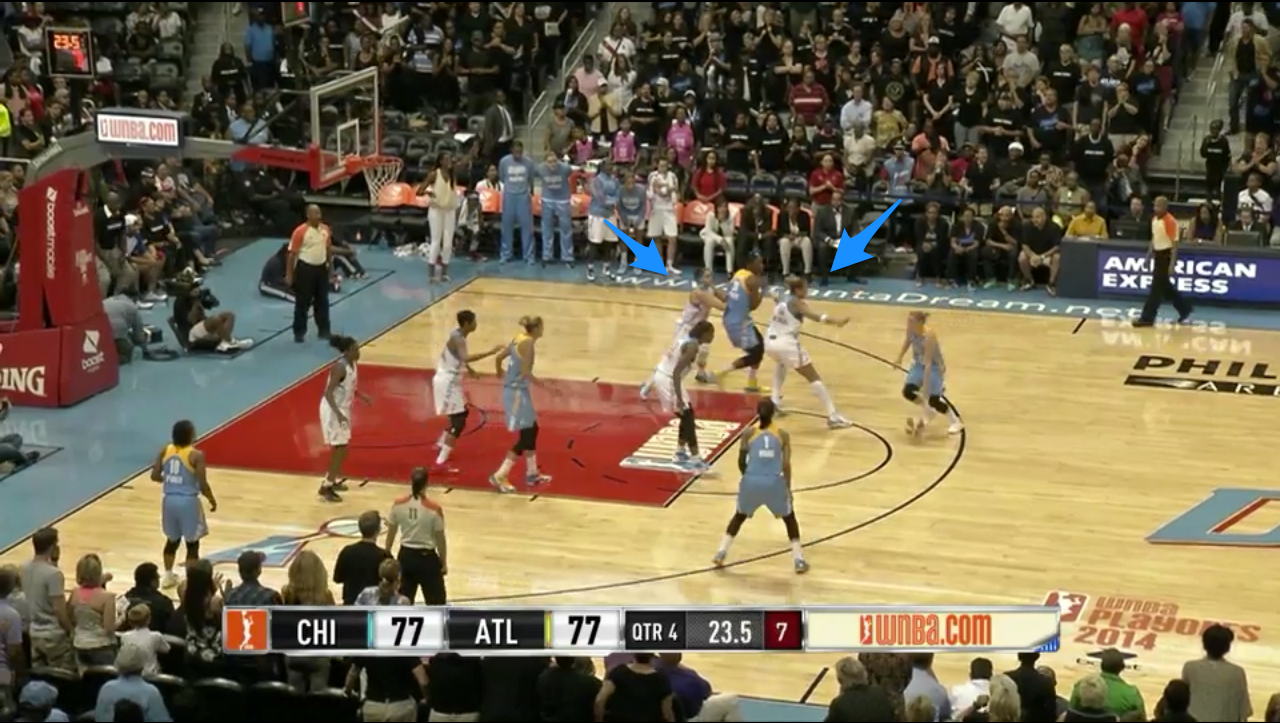 Vandersloot recognizes this and reverses course. This time around Schimmel is in no position to recover and Fowles pins her on her roll to the basket. Erika de Souza hedges but remains engaged with Fowles who continues to roll to the basket. 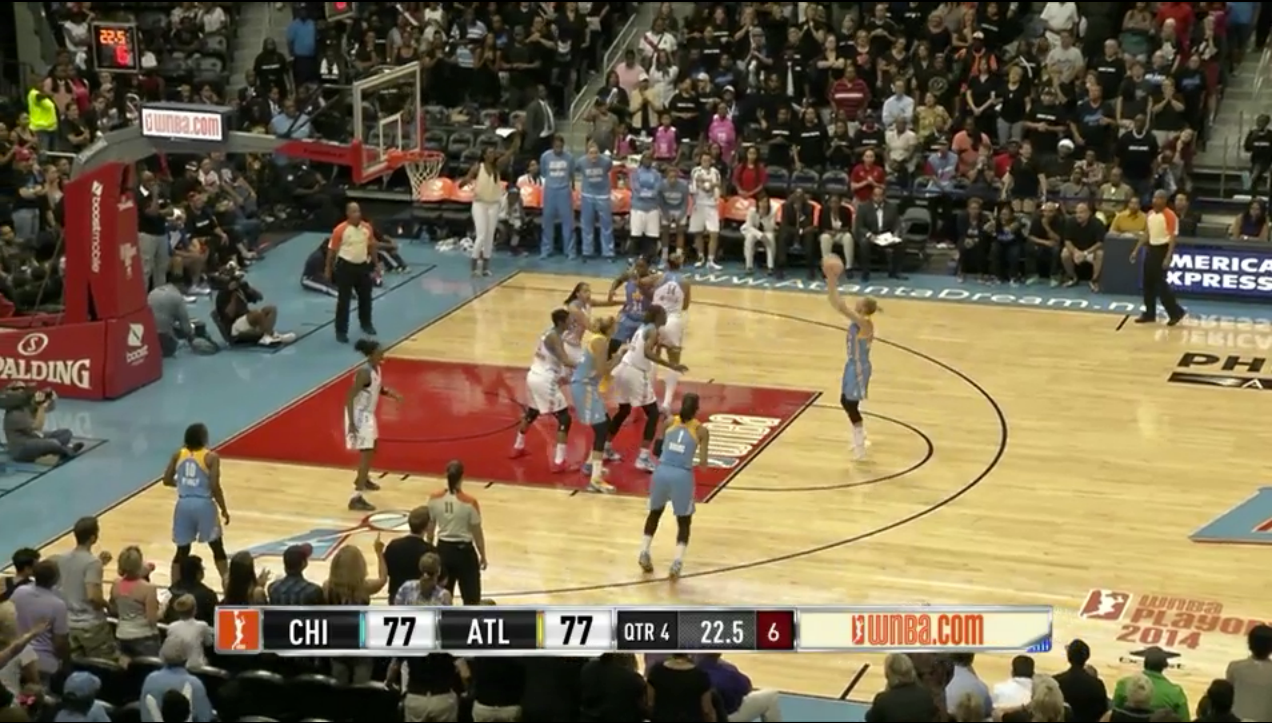 The result is de Souza over the top of Fowles with Schimmel pinned underneath. That left Vandersloot plenty of room to knock down the go-ahead bucket.

Cooper talked about the final play during his post-game press conference following Game 1. "They ran a pick and roll, Shoni got through the first one and then the second one was so low. There are times in the game where you have to do basketball things and I think the basketball thing was for Erika to switch. We will get better and those are some of the things we'll work on for the next game."

Fowles was a big target of Atlanta's defense for much of the game. Cooper sent several double teams her way early and the Dream focused on her whenever she was in the game. Fowles finished with 12 points on 4-5 shooting. Five attempts was way under her regular season average but Fowles' teammates did an excellent job of playing off that defensive attention and this play was a good example of such. 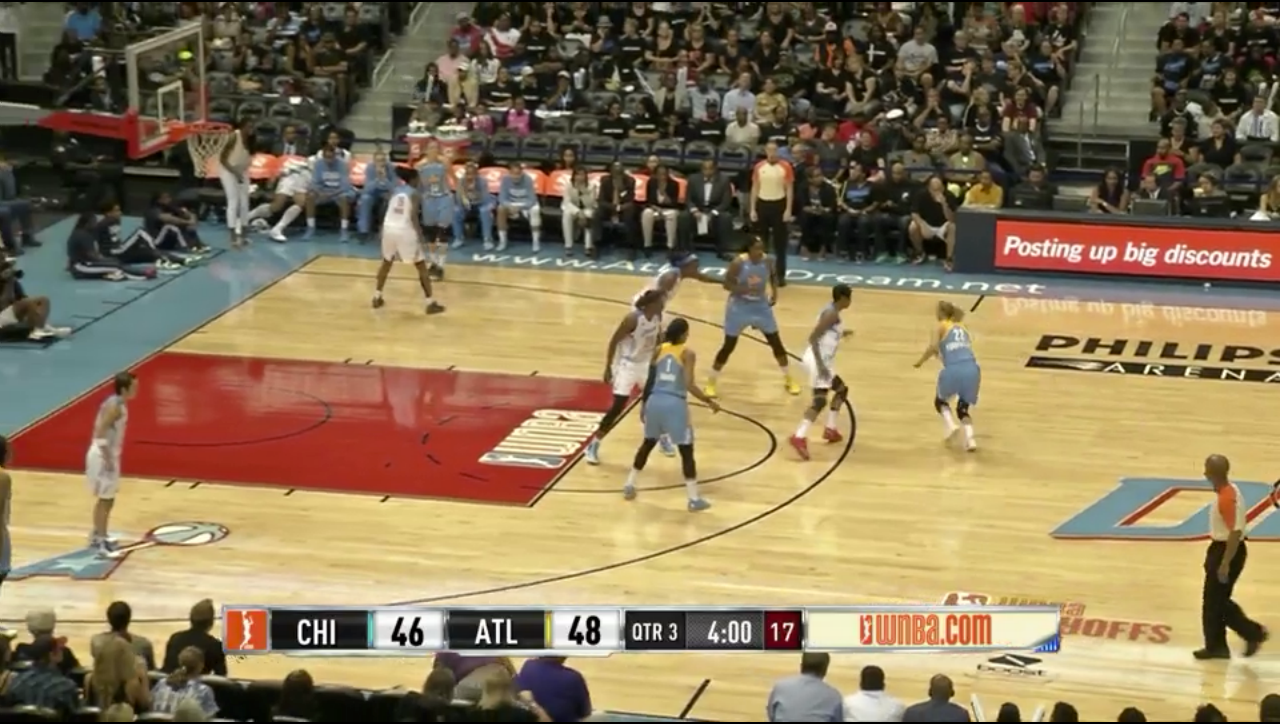 Here is another example of the attention that Atlanta was giving to Fowles. In this set, Vandersloot is being guarded by Angel McCoughtry while Aneika Henry has Fowles. 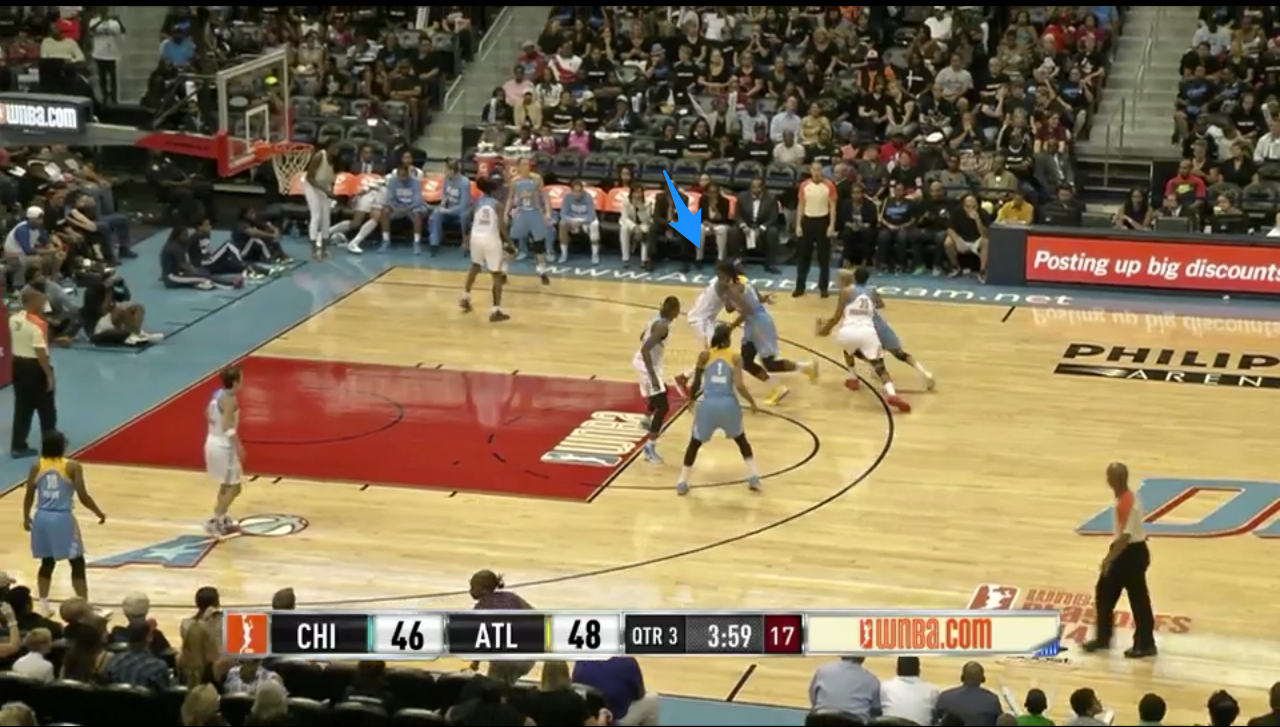 The play is another pick and roll at the elbow. McCoughtry goes over the screen but Henry remains attached to Fowles and doesn't hedge to slow Vandersloot. 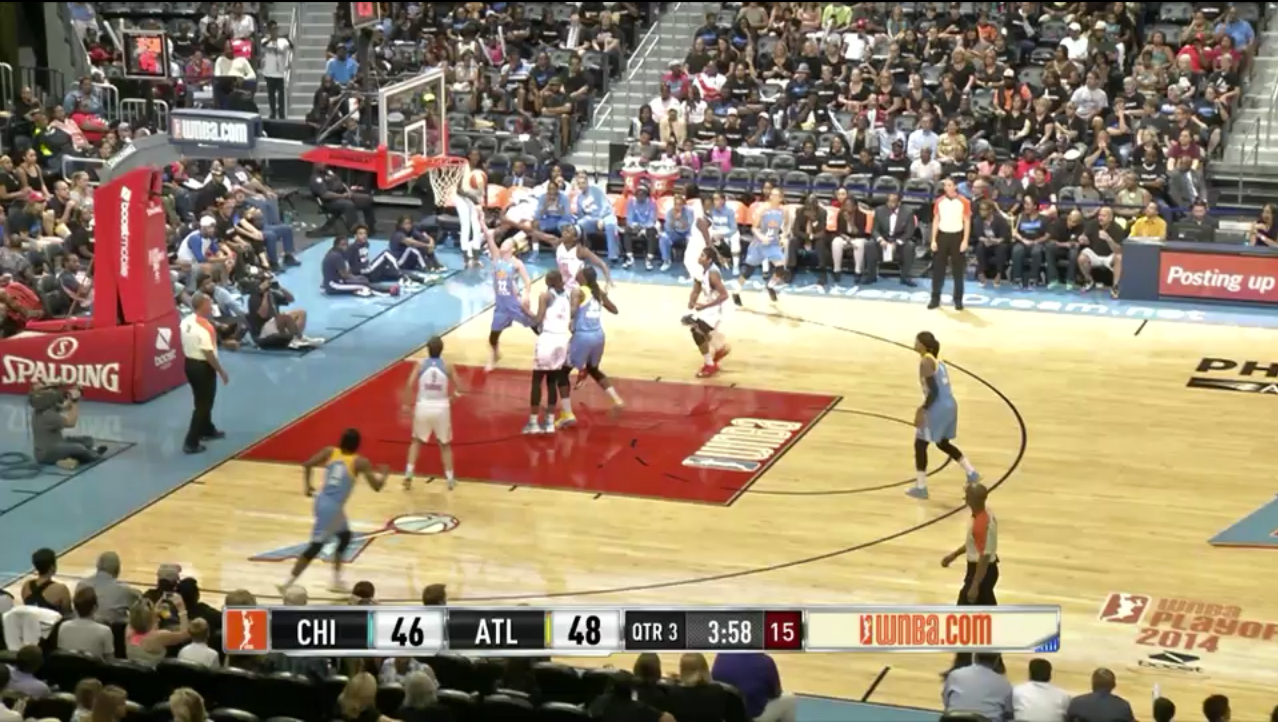 The result is a wide open driving lane and another easy basket for Vandersloot.

A good pick and roll team is hard to defend especially when that team has good shooters like Delle Donne and Prince who are ready to punish any defense that tries to sag to the paint. Atlanta is going to be forced to mix things up whether it is switching or trying to trap the ball handler on the screen. Throwing different looks and mixing up coverages may be necessary. With their season on the line, Atlanta can't afford to approach things conservatively.