The Atlanta Hawks went into the offseason with one distinct goal and that was to add size and depth to the wing position. While they were unable to make a big splash, they did acquire some pieces that will add depth and fill some glaring holes from last season's team. The first addition was 6-foot-7 wing Thabo Sefolosha, formerly of the Oklahoma City Thunder.

The Hawks officially acquired Sefolosha in a sign and trade deal with the Thunder on July 15. He initially agreed to a three-year deal worth $12 million with Atlanta a couple of days into free agency. The deal is slightly front-loaded with Sefolosha pocketing approximately $4.1 million this season. That is a slight raise over the $3.9 million he made in Oklahoma City last season.

While the Hawks were looking to add some defensive help to their wing rotation, Sefolosha looks to be a similar player to DeMarre Carroll offensively. He's a selfless player who looks to be a good fit for Atlanta in that he can play in transition and can also help space the floor.

Here, Sefolosha spaces to the corner while Reggie Jackson works off the high pick-and-roll. Jackson gets into the paint and forces Kyle Korver into help position before kicking out to Sefolosha for the wide open corner three. This setup looks very similar to many of the sets employed by the Hawks with a high screen and roll and a pair of shooters spacing the floor in each corner.

Here is another instance where the Thunder use a back pick to free Sefolosha for a corner three. The Hawks and Spurs frequently use this same action to free shooters along the baseline.

Sefolosha saw his numbers drop in 2014 thanks in large part to a calf injury that caused him to miss over a month of action. He finished with averages of 6.3 points, 3.6 rebounds and 1.3 steals. His shooting numbers dropped to 41.5 percent from the field and just 32 percent from 3-point range.

Dig a little deeper and you can see that his numbers were severely impacted by a slow start in November and then a terrible April upon his return from the injury. Sefolosha converted just 39 percent of his field goal attempts and just 27 percent of his three-point attempts through 12 November games. He rebounded and saw his percentages return to his career levels for the next three months. His best offensive month came in February right before the calf injury where he was shooting 39 percent from beyond the arc.

Sefolosha bottomed out upon his return from the injury shooting, just 25 percent from the field while going 1-for-13 from 3-point range over the final six games. Things didn't improve in the playoffs as Sefolosha appeared in 15 games but connected on just 26 percent of his 3-point attempts. His struggles led to a loss of confidence and a hesitancy to take shots which resulted in him losing his starting job. 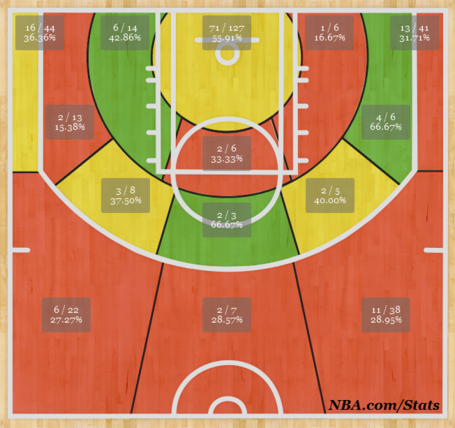 The Hawks are banking on a return to form for Sefolosha this season and if he can come close to his career shooting numbers. He is a career 44 percent shooter and connected on 42 percent of his 3-point attempts in 2013 and 44 percent in 2012. He was particularly effective from the corner where he was above league average overall in 2013. Carroll attempted 268 3-pointers for the Hawks in 2014 and 107 of them came from the corner. Sefolosha could be used in a similar fashion this season.

Here is Sefolosha's shot chart from the 2013 season which is more in line with his career numbers: 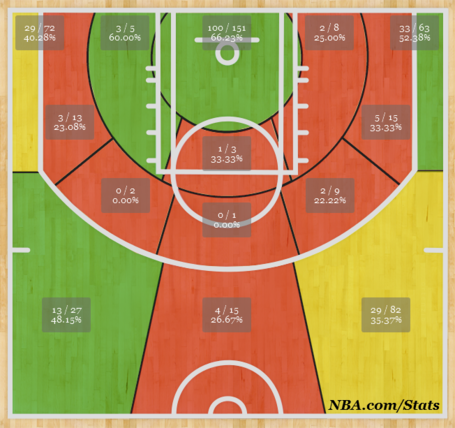 Sefolosha's real value however lies on the defensive end of the floor where he has been a better than average defender over the course of his career. Atlanta was ridiculously thin and undersized on the wing last season and Sefolosha's presence adds size and depth behind Carroll.

Like his offensive numbers, Sefolosha's defensive numbers also dropped in 2014. Per NBA.com, he finished with a defensive rating of 101.0 last season. That put him among the team leaders for the Thunder and he usually drew the opposing team's most dangerous wing scorer. That 101.0 rating would have tied him with Pero Antic for second best on the Hawks last season behind only Al Horford who played in just 29 games. Sefolosha's defensive rating in 2013 was 97.6 and was an astounding 93.6 during the 2012 season.

On this play, Korver sets a screen on Serge Ibaka to help free Paul Millsap. Sefolosha helps off of Korver and forces Millsap to put the ball on the floor. He then has enough quickness and length to bother Korver as the ball is swung to the corner for a 3-point attempt. It's that added length and awareness that will benefit the Hawks the most this season.

Here is another example of Sefolosha's awareness. In this alignment, the Hawks many times will run Korver off of a series of baseline screens to try and free him on the other side. Here Sefolosha goes over the screen. Seeing this, Korver adjusts and reverses course. Sefolosha however is long enough to still intercept the pass and then convert at the opposite end of the floor.

Here, Sefolosha chases Korver around a screen from Millsap. As the defense collapses on Korver, Sefolosha uses his wingspan to deflect the pass and come up with the steal. He then leads the fast break and finishes it off with a nice no-look pass to Kevin Durant for the lay up.

Sefolosha's days as a regular starter are probably over, but he figures to be a big contributor off the bench for Atlanta next season. During his tenure with Oklahoma City he spent most of his time at shooting guard but he figures to see a lot of time at small forward this season. The Hawks often struggled defensively when Carroll was off the floor and Sefolosha will give them another option for some of the more difficult match ups.

Atlanta is betting on a bounce back season from Sefolosha who was good in 2014 but fell way off down the stretch. In many way,s he looks like a system player yet the Thunder's offensive system left a lot to be desired. If healthy, he should fit nicely into what the Hawks are trying to do at both ends of the floor.