What operating under the salary cap entails. Let's review the Hawks standing with respect to the Salary Cap and look forward to a few potential moves the Hawks can make.

It is official now. We can officially tell you that the Hawks have Cap Space and have utilized it. We also know the Hawks are Hard-Capped at $80.829 million.

As Jason Walker has already mentioned, Thabo Sefolosha is officially an Atlanta Hawk via a sign-and-trade with the Oklahoma City Thunder. The deal involved the Hawks sending the draft rights to Sofoklis Schortsanitis for Thabo Sefolosha, the draft rights to Giorgos Printezis, and a reported $550,000. Because the Oklahoma City Thunder are over the Cap, this move generated a Traded Player Exception (TPE) for the starting Salary of Thabo Sefolosha ($4,150,000). Because this was a sign-and-trade transaction, the Hawks need one of two things to complete this. Either a TPE, which they do not have, or Cap Space. As we have already detailed, the Hawks potentially had a Team Salary of $62,207,654 because of various capholds. So the Hawks needed to clear the requisite Cap Space to acquire Thabo and thus they renounced their Non-Taxpayer Mid-Level Exception and Bi-Annual Exception1. We also know that the Hawks become Hard-Capped since they acquired a player via sign-and-trade.

The TPE from this trade allows the Thunder to exceed the Salary Cap by $4,150,000 in a future move(s). The Hawks did not give them this as no team in the NBA can give a TPE, the exception occurs because a team decides to classify a trade as a Non-Simultaneous Trade. This allows a team one year to replace the salary they sent out in a trade. Sometimes this is useful, but other times teams never utilize this TPE and they expire after a year.

We can now update the Team Salary list that we have been putting up for the last few articles on the Cap:

The most likely scenario is that the Hawks renounce Elton Brand and Gustavo Ayon and leave everything else the same for the time being. This implies the Hawks have $10,839,436 in Cap Space.

Mr. Bazemore is all business.

There are more moves available for the Hawks. In particular, we know that the Hawks will eventually acquire Kent Bazemore on a contract starting around $2 million. At this moment, there are only three methods of acquiring Kent and two are redundant.

The most intriguing way for the Hawks to sign Kent is with the Room Mid-Level Exception. This would arise if the Hawks used up the rest of their Cap Space, which could be as high as $13,535,175. Clearly, those interested in the Hawks making a major move would prefer this method.

In any event, it is only a matter of time until Kent is officially announced as a part of the Hawks. 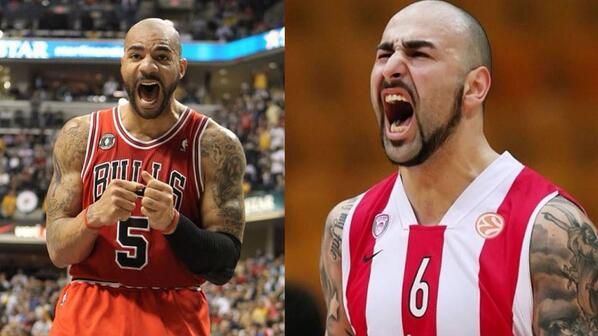 The amnesty process for the NBA works very similar to the waiver procedure, with a few exceptions. There are two different claims that a team can make on a player that has been waived using the amnesty provision. The first is a full waiver claim, which is where a team claims the entire contract of the amnestied player. If more than one team puts in a full waiver claim, then the team with the worse record is awarded the player. Currently, only the 76ers and the Suns could take on Carlos Boozer's $16,800,000 contract.

At this moment, this becomes an intriguing situation if you believe there are multiple suitors for Carlos. Mark Deeks recently profiled the number of teams with Cap Space left this offseason. Suffice to say, the teams with more than $2 million left in Cap Space are potentially the Hawks, Rockets, Lakers, Bucks, Magic, 76ers, Suns, and Jazz. This appears to be enough teams in order to make a competitive bid process for Boozer. If there were only a few teams available, then this may be an interesting game theory situation whereby the Hawks would be interested in only bidding $1 more than their competitor. With up to 8 teams, it becomes harder for Danny Ferry to read the field and submit a Price is Right style bid.