What are the Hawks getting in Adreian Payne?

With the 15th selection the Hawks selected Michigan State power forward Adreian Payne. How and how soon can he help in Atlanta?

Share All sharing options for: What are the Hawks getting in Adreian Payne?

If you are a 2014-15 season ticket holder for the Atlanta Hawks, last night's first round selection should get you excited about the upcoming season. Atlanta was fortunate that several players with potential stardom fell out of the lottery, but Danny Ferry selected the player available who is probably most ready to help next season in Michigan State senior power forward Adreian Payne. Viewed as a player Ferry might have targeted in a trade down, Payne is an excellent fit for what Atlanta does and what Atlanta needs. A player I compared earlier in the season to Robert Horry, Payne brings a unique skill set to help Atlanta immediately on both ends of the floor.

The Hawks most need to improve their perimeter defense this offseason. Without an obvious player in the draft ready to do that other than the undersized Gary Harris, Payne can help in improving the perimeter defense from the power forward position. Schooled throughout college by Tom Izzo and carrying a 7'4 wingspan, Payne is an excellent help defender who moves well at jumping out on perimeter shooters. His lateral movement is below average as he takes long strides, but he is effective at chasing people off the three-point line. While not an elite shot blocker by any measure, he is an intimidating presence in the post who uses his lower body well. Due to his length, Payne may develop into being able to defend three positions. Adreian will need to continue to improve an ability to defend without fouling, but as a presence off the bench that weakness will be less of an issue.

The three secondary areas of improvement for Atlanta in this offseason are adding more shooter, offensive rebounding, and passing. Payne knocked down 42% of his shots from the 3-point line this season while also staying active on the offensive glass with 1.5 offensive rebounds per game. He is a stretch big who does not hide out on the perimeter. Payne takes most of his threes in transition or out of pick-and-pop action. Most impressively, he shot a high percentage from the perimeter while taking virtually no shots from the corner--commonly the easiest place to knock down threes. The shot chart below shows how effective Payne was from the perimeter while both finishing well around the rim and being effective in the Lamarcus Aldridge zone: 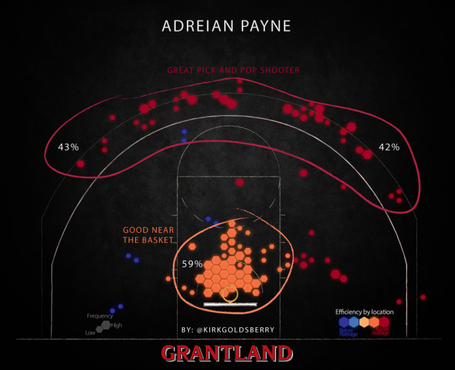 Free-throw shooting is a strong indicator of a player's ability to improve or maintain college percentages. Adreian knocked down 79% of his free throws and set an NCAA tournament record by going 17-for-17 from the free throw line in his 41-point performance against Delaware.

Payne was not valued as a lottery prospect, because of a low ceiling. He can dunk and block shots, but he is not a leaper. He may be overwhelmed at times by the elite athleticism of the NBA. He is a willing passer but not a skilled one. He lacks natural instincts on the court. Payne is more of a soldier who does everything that he is asked and is a better fit as a role player. He has small lungs for his size which causes him to struggle when playing a long stretch of minutes. Despite the issue, he still managed to play 28 minutes per game this season. The condition does not prevent him from being effective, but it does mean he might be a better player by playing stretches off the bench.

Whatever deficiency harms Payne in his lungs, he certainly is not harmed in his heart. A player beloved by his teammates and raved about by Tom Izzo, his competitive character and warmth were revealed this season in his relationship with Lacey Holsworth. If you have not read the story of their friendship than you can catch up on it here. Adreian honored Lacey in his choice of suit on draft night and welcomed her mother as his guest. For those who want high character players representing Atlanta, it would be hard to upgrade on Adreian Payne.

The pick is not a slam dunk or a drilled three at the buzzer, but it is a solid knockdown jumper off a well executed screen. If Atlanta lands perimeter defensive help in free agency and Mike Scott gets overpaid by another team, this draft pick may be viewed as 4-point play in a couple of weeks. My dream draft would have been Atlanta trading down to grab Payne and K.J. McDaniels. For about an hour last night, I had some hope that maybe it would happen. While some fans may be disappointed in not landing a potential star in late June, Atlanta landed the player who is most likely to help them play into early June.