Peachtree Hoops is doing a player-by-player review of the 2013-14 Atlanta Hawks and the series continues with a profile of point guard Jeff Teague.

No player on the Atlanta Hawks roster has been as divisive as point guard Jeff Teague, and in year one of the Mike Budenholzer era, that theme certainly didn't change. However, the now 25-year-old led the team in minutes this season while captaining a brand new offense that was significantly different than anything he had run previously, and the result was a "career year" despite some issues with his shooting.

For a bit of reference on Teague's woes in that department, let's take a glance at his shot chart. 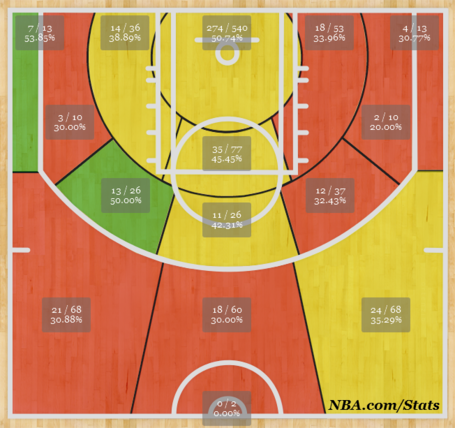 Jeff Teague is no Kyle Korver, but frankly, that is something that we already knew. That said, even the shooting-challenged point guard had an "off" year by his standards, and that accounts for some of the ugliness in his advanced metrics when compared to previous seasons.

Teague finished the season having converted just 43.8% of his field goal attempts and 32.9% of his threes, but on the bright side, those numbers were much worse early in the season. In fact, Jeff's ratios after the All-Star break were rather impressive (48.2% FG, 42% 3-PT), and that should bring a decent amount of optimism to the table, especially when remembering that his partner in crime, Al Horford, should be back in full by the team the team takes the floor.

The still young point guard also saw improvements in his all-court game, as Teague posted his best rebound rate as a starter to go along with a solid assist rate and a dip in turnover percentage. It is mildly impressive that Teague could have posted the numbers that he did with his shooting issues, but at the same time, diehard fans would recognize that the inconsistency of Jeff has been the largest issue.

"Playoff Teague" and "Aggressive Teague" have become commonplace phrases when Teague displays the capability to take over a game, and he is incredibly exciting when that happens. However, he failed to reach double-digits in scoring on 14 occasions this season (an arbitrary endpoint, to be sure), and Atlanta was just 4-10 in those contests. There is a reason that Budenholzer consistently preached "aggressiveness" from Teague at virtually every turn this season, and hopefully, year two in the system will yield a more consistent brand of basketball offensively.

Then, there is the defensive end where, frankly, Teague is incredibly underwhelming. The point guard posted the worst defensive rating for any regular (109 points per 100), and he seemed utterly lost at times on the court. This is nothing new for Jeff, who has never been known for his defensive prowess, but expectations were understandably raised in year five of his career, and he consistently fell short on that side of the ball. At this point, no one could reasonably expect Teague to become a "stopper" or anything of the sort defensively, but the next step for Jeff will simply to be in tune to the team concept in order to cut down on mental lapses that lead to uncontested shots for the opposition.

When the Hawks matched a 4-year, $32 million offer sheet for Teague in the off-season, it was largely seen as a reasonable deal. His performance (16.5 points, 6.7 assists per game) would seem to support that notion, and it certainly doesn't look to be a disastrous deal. That said, there will always be a segment of the fan base who is underwhelmed with Jeff provided that he doesn't take a consistent step forward, and with a 1st-round pick in Dennis Schröder lurking, the hot seat could ramp up next season.

Still, Jeff Teague was exceedingly competent for a great deal of the 2013-2014 season, and that is a positive thing, especially in a new system. If Teague can sustain the bump in his shooting from the second half of the year and combine it with an uptick on defense, he could be a borderline All-Star (especially in the East), and if that is the case, he will look like one of the bigger bargains in the NBA.