Peachtree Hoops is doing a player-by-player review of the 2013-14 Atlanta Hawks and the series continues with a profile of sharpshooter Kyle Korver.

Kyle Korver is one of the best shooters on planet Earth. This fact is not in dispute at this point, and his 2013-2014 performance reflected his incredible abilities in that aspect of the game, while further establishing him as an above-average starter at the shooting guard spot.

In case you (somehow) had any doubts on the utter ridiculousness of Kyle Korver's shooting performance this season, gaze at the splendor of his shot chart. 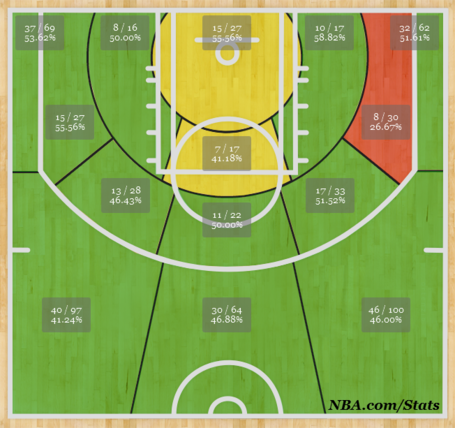 With the somewhat amusing exception of the right-corner jump shot in the mid-range, Korver flooded his shot chart with green (above-average) shooting areas. On the whole, the now 33-year-old finished the season with 47.5% shooting from the floor, 47.2% shooting from 3-point range and even 92.6% from the free throw line for good measure. Korver led the NBA (!) in 3-point shooting and true shooting percentage (65.3% to best LeBron James), and his shot-making was brilliant in Mike Budenholzer's free-flowing offense.

We could probably go on for days just about Korver's shooting prowess, and to be honest, one of the more underrated parts of his game is his ability to free himself of opposing defenders with off-ball movement. However, there are other parts of Kyle's game that deserved attention this season, as he is certainly not a one-trick pony at this stage in his career.

Korver's defense has become a point of contention (for me, specifically) in that some people maintain that part of his game as a "weakness". To be honest, that couldn't be further from the truth, and I would go as far as to say that Korver is an above-average defender when examining the entire picture. Yes, he will never be the "lockdown" player on that end as a result of relatively limited explosiveness and athleticism, but he is more than adequate in reasonable match-ups (i.e. not guarding the aforementioned LeBron James) and with DeMarre Carroll next to him, that is all he is asked to do.

Help defense would certainly be the strong suit of Korver's game on that side of the ball, and he is seemingly always in the correct position. Defensive rotations are often overlooked, especially by more casual fans, but they are utterly critical (see Scott, Mike) in maintaining solid defensive metrics, and there is a reason that Korver was 4th on the team in defensive win shares this season. Lastly, the 6-foot-7 swingman is active in passing lanes (shout-out to "Hands Havoc Korver") and his production in the steals category (1.0 per game) is quite solid.

From a play-making standpoint, there has been a ton of discussion about Atlanta's "limitations" with having both DeMarre Carroll and Kyle Korver on the floor together. However, the Korver-Carroll combination performed extremely well offensively, scoring 106.6 points per 100 possessions in more than 1,500 minutes together (with a +6.1 points per 100 net rating), which should put to bed any notion of their "ineffectiveness" in shot creation. Korver will never be someone that a credible offense looks to break anyone down off the dribble, but he is crafty in the mid-range, and when you are as good as he is in coming off screens, the looks create themselves.

When Danny Ferry inked Kyle Korver to the 4-year, $24 million contract prior to this season, there were some vocal critics of the move, even to the extent of calling it the worst contract on the roster. Simply put, that is off-base. Korver earned just over $6.7 million for the 2013-2014 season, but given his production on both ends, that is more than a fair rate, and the deal was built in a way that it now declines in each approaching season. Paying $6 million per season to a very solid starter on the wing is a more than justifiable expense, and unless something vastly changes, Hawks fans should gear up for three more years of incredibly solid production from one of the game's best marksmen.