Pero Antic went from unknown to starting center for the Atlanta Hawks in wake of Al Horford's injury. Where does he fit going forward?

When the Atlanta Hawks signed Pero Antic this past offseason he was pretty much an unknown in NBA circles. He was an accomplished player overseas with championship experience but was short on athleticism and was already 31 years old. Most European writers didn't consider him an NBA prospect yet the Hawks, particularly Danny Ferry and Mike Budenholzer chose to draw on that experience and gave Antic a chance.

To be fair Antic was never supposed to have played as much as he did. He was never supposed to have been a starter but injuries dictated that very situation. He played sparingly to start the season behind Al Horford and Gustavo Ayon but performed well when called upon in reserve duty. Once Horford went down, Budenholzer eventually turned to Antic and he filled the spot as best he could until he fell victim to his own injury that hampered him for the remainder of the season.

Antic is not your typical big in that his offensive game is confined to the paint although he did manage to convert at the rim at a league average rate. Pero's strength was as a stretch five and that his presence on the court required opposing centers to account for him. His presence helped open the floor back up once Horford went down but as you can see from his shot chart, he didn't exactly knock down the three with any regularity. 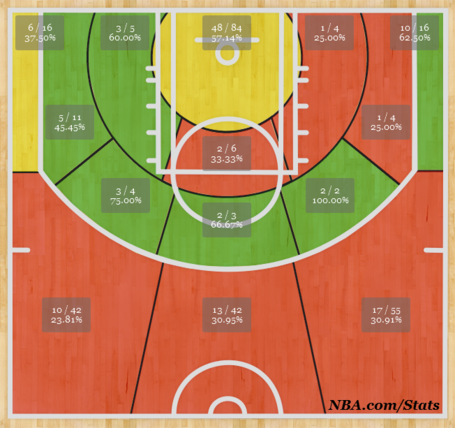 Pero's best month came in January when he converted 43 percent of his three-point attempts and grabbed 5.9 boards in just over 24 minutes. He suffered a broken ankle against the Brooklyn Nets in Atlanta's trip to London and really never was fully healthy for the remainder of the season. Once he returned to action his three point percentage dropped to 30 percent in March and 27 percent in April. He bottomed out in the playoffs when he made just 3-25 attempts against the Pacers.

Pero did bring value on the defensive end of the floor. According to NBA.com, he had the best defensive rating on the club for anyone that played at least 40 games. Budenholzer went out of his way throughout the season to praise Antic's basketball IQ and the intangibles he brought to the team. That is an important aspect that can't be overlooked when you look at what the future holds.

Antic has a $1.25 million contract for the upcoming season that becomes fully guaranteed if he is not waived on or before July 15 per ShamSports.com. Even with his short comings, that is a ridiculously good value for a big man who is best suited as a bench option. Unless other moves this offseason dictate otherwise, expect to see Antic back in a Hawks uniform next season.