Peachtree Hoops is doing a player-by-player review of the 2013-14 Atlanta Hawks and the series continues with a profile of small forward DeMarre Carroll.

Stop me if you have heard this before. Danny Ferry and the Atlanta Hawks acquired a player (via the draft or free agency) for a very limited cost, and that player greatly exceeded expectations. While that description certainly fits with guys like Mike Scott, Elton Brand or Shelvin Mack (in addition to Paul Millsap), the player who personifies "bang for the buck" on Atlanta's roster is small forward DeMarre Carroll.

Carroll signed a 2-year, $5 million deal in the off-season after being a part-time player in Utah, and while the deal was mostly supported, no one could have imagined how well he would perform. The 27-year-old more than doubled his minutes from the previous season with the Jazz, and in the process, he managed to substantially improve his offensive efficiency while still performing as the top perimeter defender on the Hawks roster.

Offensively, expectations were extremely low for Carroll, as he entered the year shooting just 42.8% from the field and 28.4% from 3-point range (true shooting of 48.8%) for his career. However, "the Junkyard Dog" put together an impressive shooting season in Mike Budenholzer's offense. 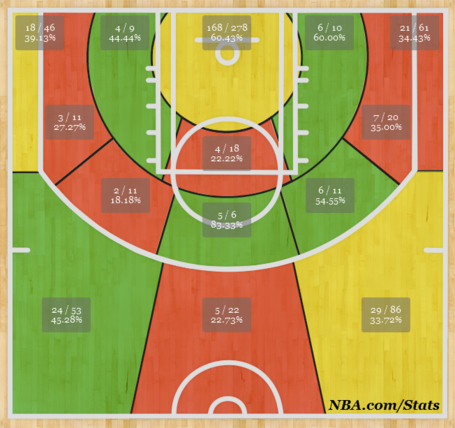 Admittedly, DeMarre's shot chart is a bit uneven, as he struggled on corner threes (which should be the most efficient shot) and lit it up from the left wing. All told, though, Carroll amassed an extremely solid 57.5% true shooting on the strength of 47% from the floor and better than 36% from long distance, and that is extremely encouraging. The veteran forward has joked about becoming the "African-American Kyle Korver" (yes, he really said this), but even if he simply replicates his production from 2013-2014, it is a win.

From a play-making standpoint, Carroll is a bit uneven on the surface (to be kind), but his turnover rate is incredibly low (10.1%, 1.2 per 36 minutes) and that is always a positive from a wing player. The Hawks could certainly use a more natural backup to DeMarre in the future, but seeing him hold up under a 32-minute per night workload lends confidence in his ability to function as a starter moving forward, even with his seemingly limited offensive creation capabilities.

On the other end of the floor, it is easy to say that Carroll is the best wing defender on the team, and it is by a wide margin. No, that isn't a slight against the perennially underrated Kyle Korver, but Mike Budenholzer plainly asked DeMarre to guard the opposing team's best wing player on a nightly basis, and he was up to the challenge. Is DeMarre Carroll an elite defender in this league? I would say no, but he is well above-average, his motor never seems to slow down, and fundamentally, he is quite strong on that end of the floor.

The raw numbers (11.1 points, 5.5 rebounds per game) likely indicate to the casual fan that Carroll is nothing more than a supporting piece, and even though that is true on one hand (he'll never be an explosive offensive player), he was arguably the most indispensable player on the Atlanta roster. It is no surprise that the Hawks were 1-8 with Carroll out of the lineup this season, and while there should be a "hat tip" toward roster construction in that instance, DeMarre's value is unquestioned. Moving forward, he is penciled in as the team's small forward for one more year (at less than $2.5 million!!), and he'll certainly command a greater contract than that if he can put together a similar year of production.

Shout-out to Danny Ferry for one of the best signings (league-wide) of the 2013 off-season.