Peachtree Hoops is doing a player-by-player review of the 2013-14 Atlanta Hawks and the series continues with a profile of veteran big man Elton Brand.

When the Atlanta Hawks snapped up the services of veteran big man Elton Brand last July, the move was a quiet one. Danny Ferry and company handed the then 34-year-old a 1-year, $4 million contract to provide insurance behind Al Horford and company up front, but the deal basically assembled without fanfare and expectations were relatively low for the former All-Star. On cue, Brand emerged as one of the most valuable players on the roster, and provided a stabilizing force in the midst of countless injury woes.

For the season, Brand appeared in 73 games (making 15 starts) and he averaged 5.7 points, 4.9 rebounds and 1.2 blocks per contest. Those basic numbers obviously wouldn't blow anyone away, but when taken at per-minute value (Brand averaged less than 20 minutes per game), they stand out in a significant way. In addition, the consummate professional shot nearly 54% from the field on the season, and it wasn't with the simply array of lay-ups and dunks that you may expect. 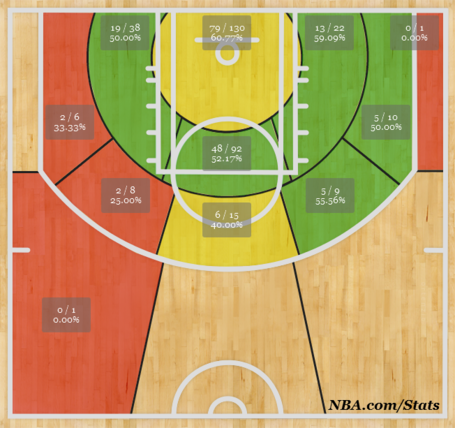 As illustrated above, Elton's mid-range jump shot became a significant weapon for the Hawks this season, and they even inspired a Twitter movement (insert laughter here). Shooting better than 50% from the mid-range is exceptional, and while Brand doesn't provide the same type of floor-stretching capability that Horford and Antic can give, his efficiency was a great asset at times.

Elton Brand stands at just 6-foot-8, but despite that, he was also the best rim protector on the active roster this season. "EB" averaged 2.2 blocks per 36 minutes, but more than that, he was always in the correct place defensively, using veteran acumen to captain the back line, and it is always interesting to watch a player who is limited in athleticism (at least at this stage of his career) manage to play high-level defense.

There are endless accounts of Brand's impact in ways outside of the stat sheet, but perhaps the greatest example came during a dire stretch in late February and early March. The Hawks were in the midst of their disastrous losing skid, and as you may recall, it was almost wholly motivated by injures. Enter Elton Brand, who averaged nearly 35 minutes per game (basically his age) over a seven-game stretch, and he topped 40 (!) minutes in back-to-back games against the Knicks and Bulls in a heroic effort to save the frontcourt from disaster.

Regardless of what you think of the "win shares" statistic (and there are varying opinions), Brand measured out as one of the most valuable players on the roster, even in his supporting role. Elton finished 3rd on the roster, behind only Horford and Paul Millsap, in win shares per 48 minutes, and even when accounting for total contributions, he landed 5th behind four starters in Millsap, Korver, Carroll and Teague. It is sometimes difficult to measure the type of impact that a 20-minute-per-night big man can provide, but with the roster in its unbalanced state, there is a reason that Mike Budenholzer always speaks in glowing terms about Brand.

The next step for Elton is a complicated one, as his first decision will be weighing potential retirement. The Hawks are on record as having a desire to bring Brand back for another season, but in a crowded frontcourt, it is unclear as to what his role would be, especially with a healthy Horford. Still, I would wholeheartedly endorse another 1-year deal for the veteran big man, and as long as there is interest on his end, it seems like a worthwhile match, even with slightly reduced playing time.