Lou Williams completed the long road back from last season's ACL injury and like many, struggled to find his groove with his game. On top of trying to get back on the court following knee surgery, Williams had to do so while also learning a new system from a new head coach in Mike Budenholzer. He wasn't cleared for contact until after the regular season started so a lot of that lost court time early had him playing catchup.

Lou made his season debut on November 15 in Philadelphia where he played just over 16 minutes and finished with seven points in a Hawks win. He began the season with a back-to-back restriction that was eventually lifted but the biggest hurdle Williams had to face was mental.

He seemed at times reluctant to put his head down on drives and spent most of the first part of his season as a jump shooter. That saw his shooting numbers take a dip and his efficiency as well as he struggled to get to the free throw line.

Williams was a part of a pair of lineup decisions that Budenholzer had to make. Around the trade deadline, he dropped Shelvin Mack from the rotation and elected to go with Williams as the reserve point guard behind starter Jeff Teague to limited results. In early March, Lou was dropped from the rotation entirely for seven games before working his way back in for the rest of the season.

Lou's percentages dropped slightly in his second year with the Hawks but he finished on a high note offensively with a solid April that saw him shoot 49 percent and hand out 3.9 assists in seven games. For the season he was a 40 percent shooter from the field and 34 percent from beyond-the-arc. His shot chart shows that he was pretty much league average across the board: 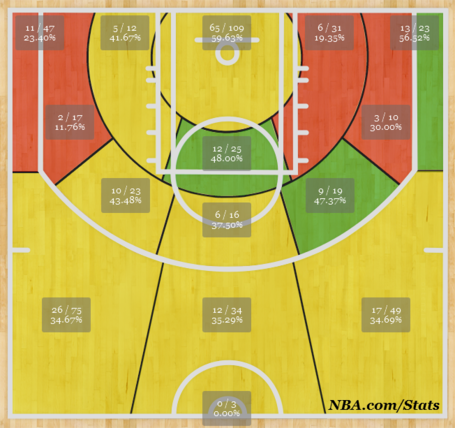 The biggest problem with keeping Williams on the floor this season came on the defensive side of the floor. Per NBA.com/stats, he finished with a defensive rating of 109.2 for the season. He finished with a net rating of -5.1. Now defensive rating isn't a perfect measure of an individual's performance but when you combine those struggles with him being less than his usual self on offense then you see the dilemma. Lou has never been what was classified as a strong defender but this season his offense didn't overcome his defensive shortcomings.

Like the Hawks, Williams' defensive ratings fluctuated throughout the season. The worst two months came in February and March when Atlanta was at their worst. Again April is his best month as he posted a 106.4 rating in seven games.

Williams is scheduled to make $5.4 million in the final year of his contract next season. His name could be one that pops up in trade rumors throughout the offseason. If Williams can get back to his attacking nature then he could be a good fit for Budenholzer's offense. However, Atlanta needs more size in the backcourt to either replace or pair with smaller guards like Lou.

History has shown that it sometimes takes two full seasons to clear the physical and mental hurdles from an ACL injury. Williams will no doubt benefit from a full summer of preparation followed by a full training camp. He is still a quality player. There is a crowded picture in Atlanta's backcourt currently behind starters Jeff Teague and Kyle Korver. Shelvin Mack is a restricted free agent, Dennis Schröder is coming off of a somewhat disappointing rookie season and John Jenkins is recovering from back surgery. How the pieces fit together heading into next season will be an interesting storyline to follow this summer.