Mike Muscala went from Bucknell to the NBA Draft and then to Spain before reaching the Atlanta Hawks but could be a part of the team's future going forward.

Mike Muscala took an unconventional path to the Atlanta Hawks in 2013-14. The Hawks drafted Muscala in the second round of the 2013 NBA Draft and he participated with the team's entry in the Vegas Summer League. Atlanta then opted to not sign him and instead have him continue his development in the Spanish ACB for Rio Natura Monbus.

Muscala played 20 games for Monbus and led the league in rebounding averaging 7.75 per game. He led Monbus in scoring (14.5) and blocks (0.80) while shooting 54 percent from the field and 87 percent from the free throw line.

Atlanta's frontline was decimated with injuries in February and that sent the Hawks in search of help. They eventually reached out to Muscala and Monbus and negotiated a buyout. He officially signed with Atlanta on February 26 and would spend the rest of the season with the Hawks.

Muscala played in 20 games for Atlanta and finished with averages of 3.8 points and 2.6 rebounds on 42 percent shooting. If you go a little deeper and look at Muscala's splits, you see that he finished the year with a strong April. Muscala averaged just 2.7 points on 31 percent shooting over his first 13 games but those numbers jumped to 5.9 points on 68 percent shooting in seven games in April.

Once in Atlanta, Muscala showed some of the same game we saw during summer league. He has a nice game facing the basket with a smooth jumpshot but struggled to finish in the paint particularly against stronger or more athletic defenders. 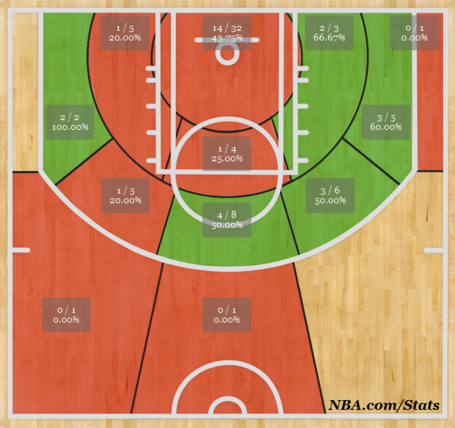 Muscala is expected to compete at Vegas Summer League again this summer and has a good chance of being a part of Atlanta's roster next season. He signed a deal through 2017 when he joined the Hawks. The 2014-15 season is partially guaranteed but the final two years are fully unguaranteed.

Muscala can look no further than fellow second round pick Mike Scott as inspiration for his offseason plans. Scott enjoyed a solid rookie year with limited minutes but worked on his game during the offseason and finished the season as an important cog in Atlanta's rotation. Muscala has a good motor and a strong work ethic which combined with the Hawks player development model could produce some solid results.