Dennis Schröder didn't quite live up to the hype during his first season in the NBA but that doesn't cast too much doubt on his future.

After being selected with the 17th pick of the 2013 NBA Draft and a good showing in summer league it looked like Dennis Schröder had the inside track to be Jeff Teague's top backup in his rookie season. That is exactly how the season began for Schröder but it certainly wasn't how it ended.

Schröder was in fact Teague's backup coming out of the preseason but it wasn't long until he lost that job to Shelvin Mack. His rookie season was mired with ups and downs as he struggled to find consistency and playing time. Schröder was suspended for one game early in the season for a low blow he delivered to Sacramento's DeMarcus Cousins. He returned to the court one night later with an 0-8 performance from the field and lost the backup job to Mack soon after.

In a lot of ways, Schröder looked like a young rookie and particularly one that was not accustomed to life in the NBA. He struggled to remain focused at times and we saw Mike Budenholzer take a hard stance with him at times. At Cleveland on December 26, Budenholzer yanked Schröder after the rookie turned the ball over on an inbounds pass seconds after being inserted into the game. Later in the season he entered a game while wearing his practice shorts and was again benched for a long stretch.

The Hawks assigned Schröder to the Bakersfield Jam of the NBA D-League for a six-game stint in early December. He seized the opportunity while averaging 17 points and 6.7 assists while shooting 48 percent from the field.

As the season wore on, Schröder was given other chances to play and finally started to turn the corner a bit. He seemed much more poised with the basketball in the later stages of the season and much more confident in what the Hawks were trying to accomplish on the offensive end of the floor. His final numbers don't reflect that but it was something that you could see if you watched the team regularly.

Schröder came into his rookie season with a lot of concerns about his jump shot. Along with having a somewhat slow release he also struggled to find consistency as you can see from his shot chart. 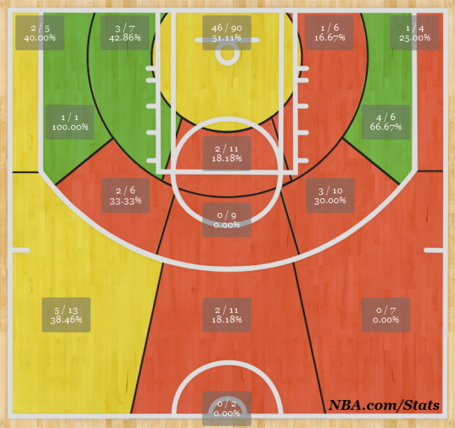 Dennis also struggled at times to finish at the rim but that was something that improved as the season went on as he improved his decision making. The Hawks need Schröder to continue to develop his offensive game heading into the summer.

Defensively Schröder struggled for much of the season as the aggressive style he displayed in summer league usually led to fouls or put him in bad positions during the regular season. That isn't an indictment as most rookies struggle defensively but it something he must improve on to earn more playing time. While Mack provided a steady option on the offensive end it was his play on defense that garnered him the back up job over Schröder.

It's an important summer for Schröder and his development. There is still a lot of upside as he at times looked like he could be a perfect fit for Budenholzer's offense. He needs experience but to get that he is going to have to improve defensively. That means getting stronger and developing an understanding of when to gamble and when not. He has the speed, the long arms to be an excellent defender its just a matter of now putting it all together.

With Mack headed to restricted free agency, it will be up to Schröder to show the organization that he is ready for a bigger role. The Hawks aren't giving up on Dennis yet but there really is only one way for him to go and that is up.