Peachtree Hoops is doing a player-by-player review of the 2013-14 Atlanta Hawks and the series continues with a profile of combo guard Shelvin Mack.

Having players on the brink of being cut from the roster in pre-season and seeing them blossom into real contributors was a theme of the 2013-2014 Atlanta Hawks, and in the case of the Shelvin Mack, it is a perfect description of events. The 6-foot-3 guard from Butler was locked in an all-out battle with Royal Ivey (!!!) during training camp, but once he emerged from that with a full-blown roster spot, his play exceeded all rational expectation.

Offensively, Mack was solid throughout the season, and that helped him supplant Dennis Schröder in the rotation. For the season, Mack averaged 7.5 points and 3.7 assists per game in 20.4 minutes per contest, and pro-rated on a per 36-minute basis, those averages would rise to 13.1 points and 6.5 assists per game. However, shooting was one of the bigger issues for the young point guard this season, and for some context, let's take a look at his shot chart. 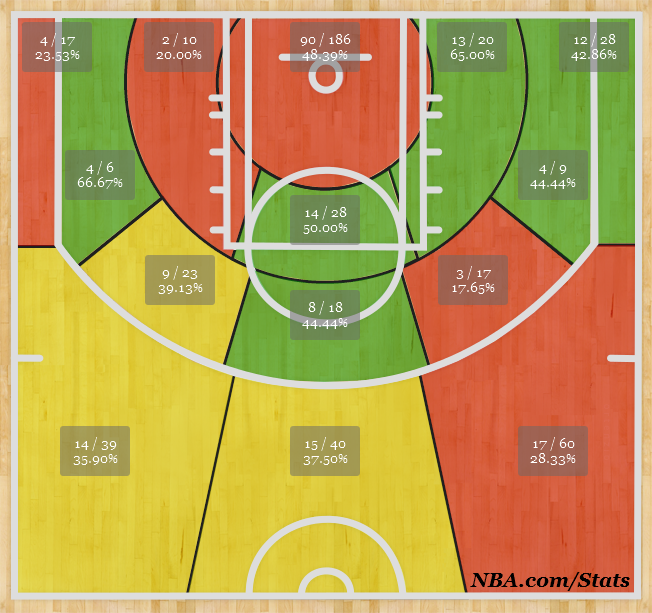 As you can see, Mack was all over the place this season. In total, he shot an underwhelming 41.7% from the floor and 33.7% from 3-point range, and he needed a big-time effort from his mid-range game to even reach those averages. It is somewhat shocking to see this type of shooting for a player that we wholly agree was a positive this season (13.1 PER is very strong for a backup guard), and Mack's ability to do other things well almost allows this to take place.

Defensively, the 25-year-old was the best option on the roster against opposing point guards. To be fair, that is a race against Jeff Teague, Lou Williams and a rookie (yikes), but Mack did a more than serviceable job on that end of the floor, and his strong build allowed Mike Budenholzer to regularly deploy him against shooting guards in certain lineups. He isn't an all-world defender by any stretch, but as long as he can continue this level of performance (or better), there is a rotation place for him somewhere.

With an eye toward the future, the Hawks have an interesting decision on Mack this off-season. He is a restricted free agent as long as Atlanta tenders him a qualifying offer worth approximately $1.15 million (which I am assuming they will do), but solid young point guards don't grow on trees in this league, and it wouldn't be a surprise to see another organization come calling. If not for the existence of Dennis Schröder, I'm confident that Ferry, Budenholzer and company would welcome back Mack at any reasonable price, but when you spend a 1st-round pick on a point guard and have $5 million-plus dedicated to Lou Williams for next season, the situation becomes murky.

Shelvin Mack managed to be a highly productive backup point guard despite some very underwhelming shooting numbers, and that is tough to do in the NBA. He is a valuable player at his current level, and if Atlanta could move Williams (who was arguably worse than Mack this season), he would be a perfect fit in a hybrid guard role again next season.