Peachtree Hoops is doing a player-by-player review of the 2013-14 Atlanta Hawks and the series continues with a profile of swingman Cartier Martin.

Prior to the 2013-2014 season, there was a real possibility that Cartier Martin would not be on any NBA roster, much less that of the Atlanta Hawks. In the end, though, the 29-year-old swingman was a key contributor throughout his time in Atlanta, and he established himself as a solid contributor at this level.

In examining Martin's list of accomplishments from this season, the first thing to notice is that he didn't spend the entire season in Atlanta. With that said, though, his exile (Martin spent six games with the Bulls mid-season) had much more to do with roster complications on Atlanta's side than they did with his play. For the year, Martin appeared in 53 games for the Hawks (making six starts) and played nearly 16 minutes per contest as the only true "swingman" behind DeMarre Carroll and Kyle Korver.

The biggest change (read: improvement) in Martin's game under Mike Budenholzer this season was his production with his jump shot. Here is a look at his full season shot chart, via NBA.com: 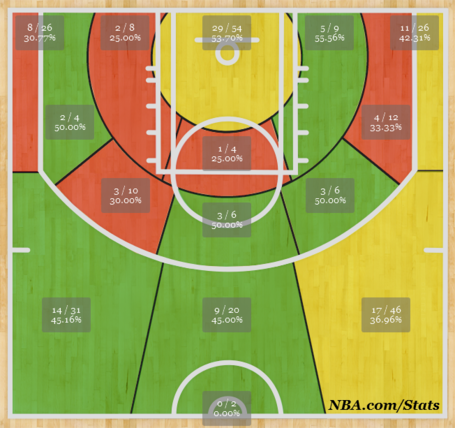 While there was a flashing red area on left corner threes, Martin performed consistently well beyond the arc, finishing the season at 39.1% from three-point range with a true shooting percentage of 55.5% while with the Hawks. In comparison, Cartier's first five seasons in the league saw him compile just a 51.2% true shooting, and while that bump could easily be partially attributed to the offensive structure, Martin still had to make the shots.

Defensively, Cartier was the lone bench option to throw at the league's best offensive wing players, and in the absence of Carroll and Korver, he did a solid job in this regard. I wouldn't say that Martin is a stud defensively by any means, but he is average at worst on that end, which helps to make up for his lack of creation skills offensively.

Moving forward toward next season, it will be interesting to see what happens with Martin. He is a free agent at this stage, and with the Hawks considered likely to draft a wing player with their 15th overall selection in addition to the return of John Jenkins (who we profiled on Monday) , the writing could be on the wall for Martin to land elsewhere. If there are no takers, however, I certainly wouldn't be opposed to seeing him return to Atlanta in an "emergency-only" role on the wing, as he was certainly serviceable throughout the season.