Peachtree Hoops is doing a player-by-player review of the 2013-14 Atlanta Hawks and up first is center Gustavo Ayon.

Ankle and shoulder injuries limited Gustavo Ayon's 2014 season to just 26 games. To put his season in perspective, Ayon appeared in eight games in November, five in December, six in January and seven more in February before he was lost due to surgery on that troublesome shoulder.

Due to the injuries, it never felt like Ayon was able to fully get comfortable in the Hawks' system. He seemed to rush things and at times struggled to finish at the rim. It never looked like the game really slowed down for him.

Ayon was the least dynamic center option available to the Hawks and his shot chart reflects that with the majority of his attempts coming at the rim. However, he was league average in converting those opportunities where he finished just 52 percent of the time. 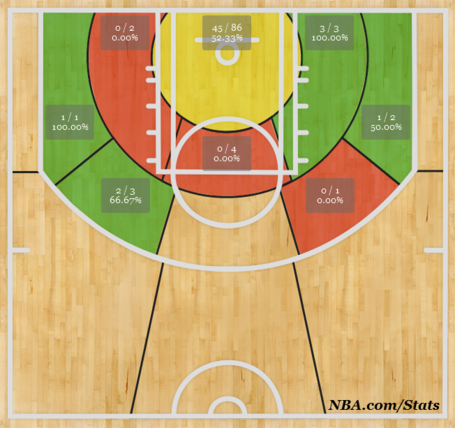 Ayon wasn't the most accomplished defender on the Hawks roster either, but he helped make up for it by rebounding. He was tops on the team in rebounding percentage at 16.7 and averaged 4.8 points in just 16.5 minutes per contest. Stretch that out on a per-36 rate and it's equal to 10.5 boards per game and isn't bad at all for a part time player.

The Hawks claimed Ayon off waivers from the Milwaukee Bucks during the offseason. He will be a restricted free agent this summer provided Atlanta issues him a qualifying offer. Once Ayon went down, the Hawks brought over second-round pick Mike Muscala from Spain and signed him to a multi-year deal. The addition of Muscala for next season combined with the potential arrival of 2013 first-round pick Lucas Nogueira casts some doubt on whether or not Ayon will be seen as a priority this summer. With that said, if he is fully recovered from his shoulder injury then he should see some interest from teams that are looking for size and rebounding at the center position.