The awesomely informational Sham Sports updated their database and now the mysteries of Mike Muscala's three year contract is revealed!

About a month ago, we tracked and detailed Mike Muscala's pending arrival to Atlanta as a member of the Hawks.

Then, Mark Deeks, master of all things contractual in the NBA, provided this nugget when queried about Mike's contract by Peachtree Hoops:

By the way, Mike Muscala signed through 2017.

Since then, we've waited to get the details of Mike's deal, assuming there would be a large amount of this contract team optional, at an affordable salary.

Muscala, per the link above from Deeks' ShamSports supersite, is signed for the next three seasons, all guaranteed, with the final year under the team option designation.

It's a total of three years, 2,779,454 dollar contract, with a few strings attached. Again per Deeks and ShamSports: 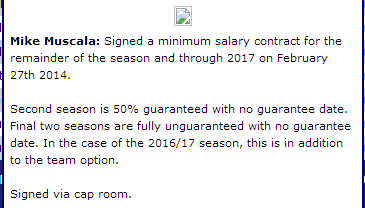 So, in the final season, even if the Hawks pick up the team option, that year is also not guaranteed. Welcome to the NBA, Mike Muscala!

The nuances of the multi-year un-guaranteed contracts handed out by the Ferry administration has been mentioned by our own salary cap analyst, hawksfantatic, before (Shelvin Mack, Mike Scott) and he'll have more later on his and the other end of year signings by the Hawks as well.

This is a far cry from Pape Sy and other draft and forget second round picks of Hawks' past. Muscala is under contract and on the Hawks bench, now we'll see if he'll be productive enough to see the 2017 part of that contract.