Report: Hawks want to make the "Gulch" a special attraction

Changes to the the "Gulch" appear to be coming.

Share All sharing options for: Report: Hawks want to make the "Gulch" a special attraction

The Atlanta Business Chronicle published a piece early this morning about the Atlanta Hawks managing partner, Bruce Levenson, and his plan for the infamous "Gulch" located near Phillips Arena and the Georgia Dome.

With the Atlanta Braves leaving downtown for Cobb County and the Atlanta Falcons getting a brand new stadium elsewhere downtown the Hawks are the lone Atlanta sports franchise not scheduled to make any major moves over the next couple of years. With building a new arena for the Hawks not on the table -- and thankfully so -- the next best option is to continue to make upgrades to Phillips and/or upgrade its surroundings. It looks like the Atlanta Spirit would like to focus on the latter.

If you're unfamiliar with what the "Gulch" actually is you're not alone. I was aware of the property, but I had no idea it was actually nicknamed the "Gulch". (Sidenote: isn't "Gulch" a really fun word to say?). The "Gulch" got its nickname from being at the ground level while the surrounding streets are elevated. 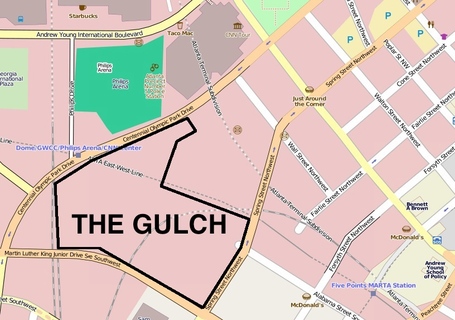 Some ideas reportedly being tossed around for the area include a sports entertainment center, hotel, casino, or modern sports medicine complex.

If the goal is to make the "Gulch" a destination spot for the fans you'd think Levenson would be thinking of doing something bolder than the choices listed above.

Either way, what the Hawks and the city of Atlanta decide to do with the uninhabited area over the next couple of years seems like it's worth monitoring.