Kissing the Bricks: My Road Trip to Indy for Game 2

Three hours on the road to Indianapolis was worth every penny on Tuesday night to see the Hawks-Pacers live. If you sat far enough away, you could barely hear the clanging of balls off the rim as broom-filled Hawks dreams were swept away one brick at a time.

Share All sharing options for: Kissing the Bricks: My Road Trip to Indy for Game 2

After the Hawks first round match-up with Indiana was secured, it suddenly occurred to me that I live closer to Indianapolis than Atlanta. I was not sure how close, but a quick search revealed it was just over 3 hours from my door to Bankers Life Fieldhouse. I decided if the prices were right and my schedule worked out, I would make the trip to my first NBA playoff game.

The schedule cleared out. The Hawks took care of business on Saturday in an overwhelming way. By Sunday night, tickets could be found for less than 10 bucks. At 3:09 p.m. Tuesday, I was bound for the 2014 NBA playoffs... 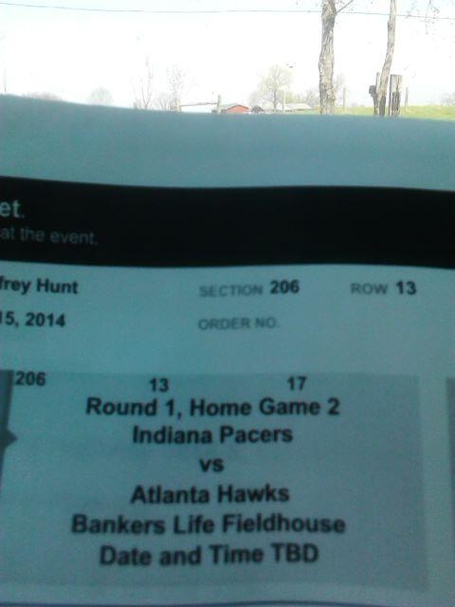 I got to Indianapolis and was able to park immediately behind the arena for $10.00. It is hard to believe the Pacers are only 15th in the league in attendance with the ease it is to get to a game. Bankers Life Fieldhouse is an awesome facility, they have a 23-year-old star to watch play, and earned the #1 seed in the playoffs. The Hawks and Pacers share a common trait of being organizations that consistently outperform their fan base.

I anticipated with traffic, walking, and normal entry hassle that I would be getting in my seat just before tip. I could not have had an better experience of arriving at a game--and I am cheap. Thirty minutes from tip, I was walking the concourse and reminded at every concession that Red Gold has been the official ketchup of Bankers Life Fieldhouse since 1940. I am not sure how that effects my future hot dog condiment selection. 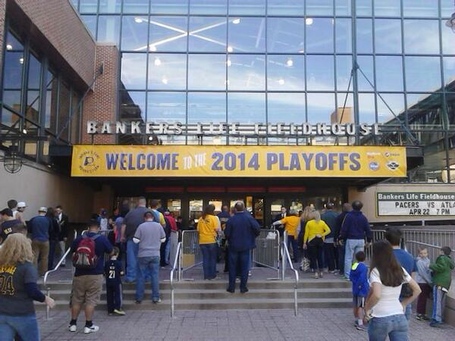 As I drove in, I saw as many pictures of George Hill on billboards as Paul George. He played for IUPUI in Indianapolis. The Pacers fans love George Hill even more than Pacers' opponents love George Hill. It is pretty clear why Hill is so slow to be criticized by fans: Indiana LOVES George Hill. He is like Indiana's Larry Bird...wait that does not work...he is like Indiana's Mike Miller if Indiana was in South Dakota. He was on the cover of the program. He was painted on murals on walls. He was on giant posters selling everything. He covers everything in Bankers Life Fieldhouse except Jeff Teague. Hill also must follow me on Twitter because he played the second half like he was personally angry with me. There was a small place in my heart that he killed. 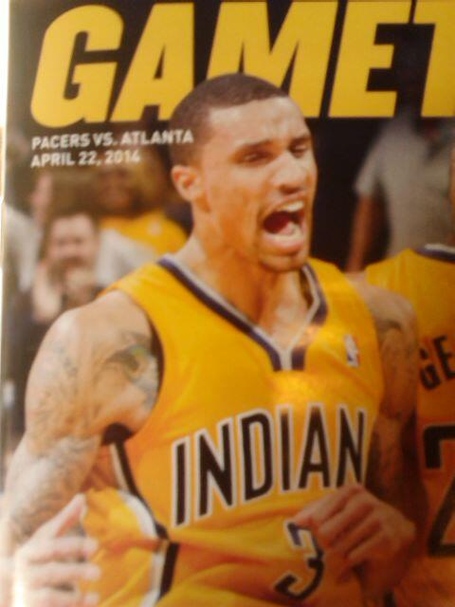 I went by the gift shop to see if by some miracle I could find non-Pacer NBA gear to commemorate the experience. The only thing they had were Larry Bird Celtics jerseys. So...I saved some money in that regard. The player with the most jerseys worn by Pacers fans (and it really is not even close): Reggie Miller. One of the best things about watching a game live at Bankers Life Fieldhouse is that you have zero fear of having to hear Miller offer commentary. Despite me sitting up in Macedonia, there is not a bad seat to watch a game in BLF. Midway through the first quarter I could hear the National Anthem carry up into the balcony. 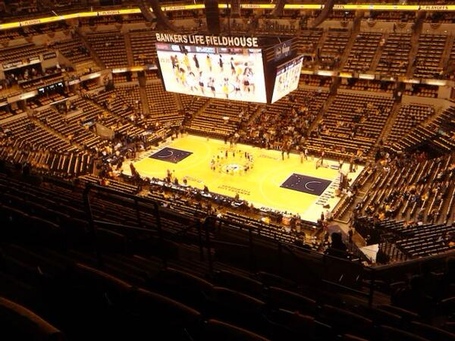 Upon arriving at my seat, I had a gold towel awaiting me. When my 4 neighbors to the left did not show, I found that 5 of them make a great bleacher seat. Nice and soft. I was also able to decode the secret language of the Pacers' NBA Playoffs slogan: 4 Ls and 1 W. The Pacers marketing team predicts Hawks in 5. (The collar of the playoff t-shirt you could purchase with the slogan was gold. The marketing team, like the Pacers, also setting lazy screens.) 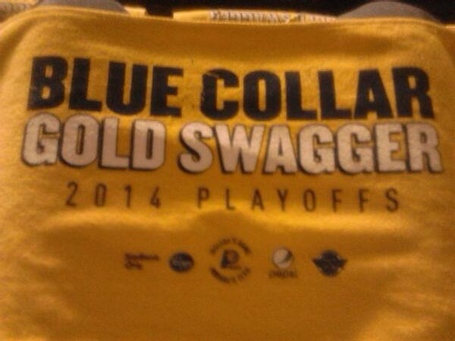 I am not sure what was more awkward: the signs that told you where to get 2014 NBA playoff tickets or the ones for ordering 2015 in advance. The latter seemed to be begging that this game may not go well. The arena had all the energy of a spring funeral as pre-game began. There were no more than 70% of the seats filled. My row only had 4 of 17 filled. I figured the Hawks were set-up well as it had to feel like a home game. Empty seats and the crowd cheering for the other team's star. I think our starters seemed confused when they announced our team first.

The pre-game was shiny and I got scared because there were fireworks and stuff. The Pacers seemed really fired up by the "right now, there is no tomorrow" lyrics greeting the introduction of their starters. I had no idea Andrew Bynum covered Van Halen songs. At least the signing makes sense now. It gave me a craving for Crystal Pepsi--which was not available at the concession stand. Must be a conflict with Red Gold. I settled for a second refill of Dr. Pepper in my souvenir cup. 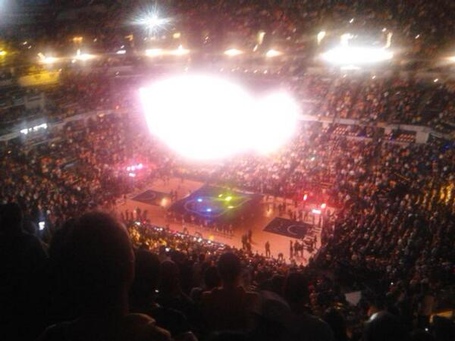 The first quarter was incredibly competitive. You could not help but be moved by how much each side wanted to win. One group completely backed in a corner despite high expectations, the other surprisingly finding themselves as the favorite. The Officiating Boobirds, consistently ready to bring it early at an NBA game, really had to be ready for the Hibbert Boobirds, many of whom seemed to buy cheap tickets just to heckle him. As much as the Pacers fans tried to find the energy to get upset at perceived no calls when Hibbert touched the ball, it did not register much with the refs when the boos began as Hibbert caught each pass.

You know how Pacers fans feel about George Hill? By halftime if Roy Hibbert were sitting in a urinal on fire, fans would have gotten back in line and waited for another place of relief to be open. I would know because I tried to make up all of the money I spent by refilling my souvenir cup as often as possible. By the time I watched the drunk fan behind me stumble down the stairs at the end of the first quarter, I was two bathroom trips ahead of him. I was basically Coach Bud to his Coach Vogel prior to halftime of Game 2.

Speaking of Vogel, I was stunned at the access I got to see his face in the huddle at the end of the first quarter. He was on top of his game. Really hard to see how his players struggle to respond to his leadership. 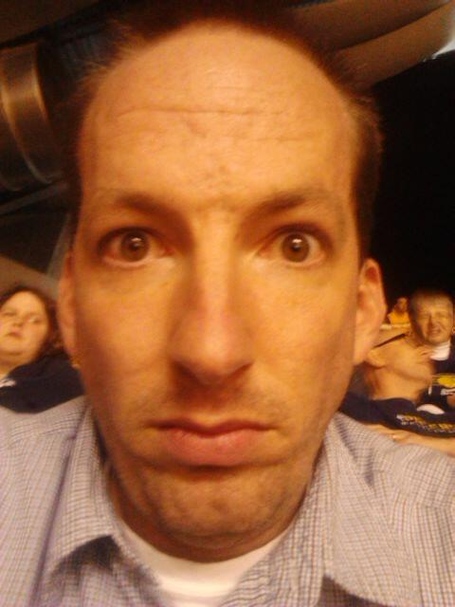 Vogel did not forget how to coach in the last two months. This is not a man who got to game 7 of the Eastern Conference Championship because he does not know how to make adjustments. Not just anyone can lead a team to a #1 seed. Not just anyone can make an adjustment that everyone knows should be made and win. If you go 11-17 over a stretch at the end of the season without making any adjustments, you can coach. He can coach. He gets paid and everything. He also coaches better when the arena gets full by halftime and people start cheering and stuff. Vogel used this thing called a "timeout" when the Pacers were struggling in the 2nd quarter, and I was able to confiscate the paper he used to draw up a play: 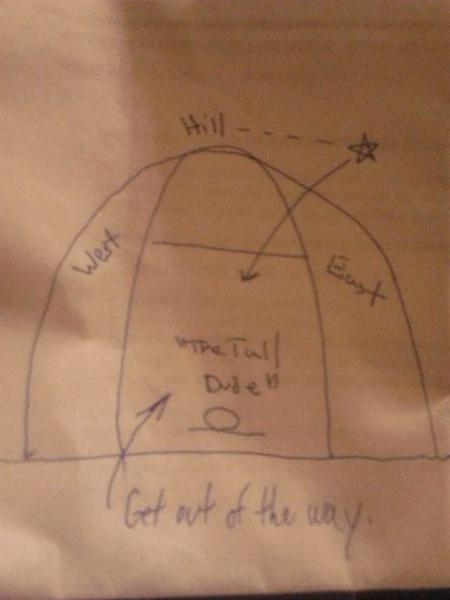 See. I told you he can coach. His adjustments were clearly the difference in the game. Jeff Teague had no trouble getting by Paul George over and over again (which AMAZED me--I did not think it would be so noticeable). The first half effort to repeatedly throw the ball inside to Hibbert to set up a turnover, a missed shot, or an embarrassment clearly showed that Vogel not only did not watch film of the last 2 matchups with Hawks, but that he actually may not have watched the games. Rumor has it that he was actually just running up and down the sidelines and mumbling words from Hoosiers. But I digress.

The game first turned when Lu-is-co-la (pronounced like Ricola commercials) gave the Pacers CPR upon entering in the first half. With Paul "only player in NBA history to be both overhyped and underrated" George as the only Pacers starter even moving in the first half, the Hawks were really close to putting the arena into a boo-filled riot before Scola entered. The most pivotal moment was the back-to-back missed threes by Jeff Teague and Mike Scott midway through the third. The misses were so bad it created a distraction allowing Larry Bird to kidnapp Roy Hibbert's statue and Sir Lance-Pouts-a-Lot from the court at the 4:39 mark. C.J. Watson entered the game, pulled George Hill off the milk carton, and the Pacers never looked back.

I don't know what could be seen on television, but Lance sulked the entire end of third quarter while the Pacers made run. He did not even sit on the bench. It was one of the more ridiculous things I have ever seen at a basketball game. I have been a big fan of his even before a lot of people knew who he was, but I have zero doubt that Indiana's problems begin and end with him.

As bad as Hibbert has been and how I joked that he plays like a statue, the truth is Pacers fans do actually like the big maxed out stiff. As I left the arena, I found the actual Hibbert statue outside the arena. 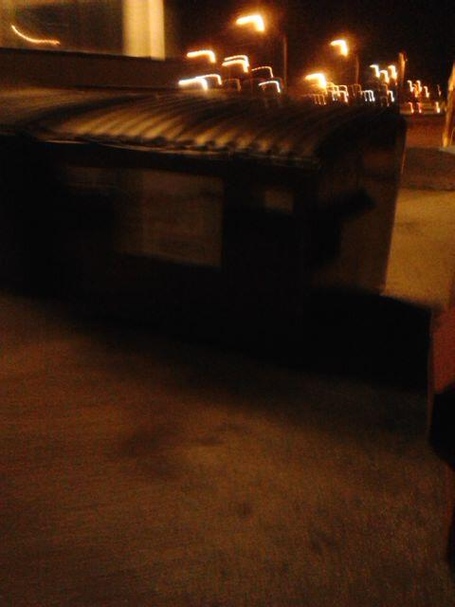 Despite the outcome, it was an enjoyable experience in a great basketball city that just does not actually show up for basketball games. Great arena and the fans who did show were great fans. If you are ever in Indianapolis (or only a state away), it is a great place to watch an NBA game or to just drink 10 Dr. Peppers for $7.00 while watching your favorite team blow an opportunity to put the series away.

Having heard rumors that Vogel has actually rescued The Statue and Pouty Face from the grips of the Legend, I have a lot of confidence that the Pacers will only be playing one more game in BLF this season--a situation that would be made all the more likely if Atlanta fans would pack Philips arena for games 3 and 4.