Jeff Teague set a playoff career-high with 28 points as the Atlanta Hawks steal Game 1 from the Indiana Pacers.

For Atlanta things couldn't have gone any better. For the Pacers this may be rock bottom. Atlanta used a 16-2 run in the first quarter to grab an early lead and then delivered the knockout punch in the third quarter of a 101-93 win in Game 1 at Bankers Life Fieldhouse.

The importance of Jeff Teague to Atlanta's success has been mentioned over and over but it was on no better display than in Game 1 Saturday night. Teague torched the Pacers for 28 points and five assists going 9-19 from the field and 9-10 from the free throw line. More importantly, it was his penetration off the dribble that forced Indiana's defense to rotate and thus provided space for Atlanta's shooters.

"I just wanted to be aggressive," said Teague. "We know they're a good defensive team with a lot of length. We just wanted to attack, stay aggressive and hit the open guy. We've got a lot of shot-makers. We know they are a long team who likes to clog the paint. But we want to stretch the floor against them."

Atlanta did just that as they connected on 11-30 three-point attempts. Counting the regular season, the Hawks have made at least 10 three-pointers in all three wins against the Pacers.

To get enough space against a good defensive team like Indiana Atlanta must penetrate and that starts and ends with Teague. A look at his shot chart reveals just how much time he spent in the paint in Game 1. 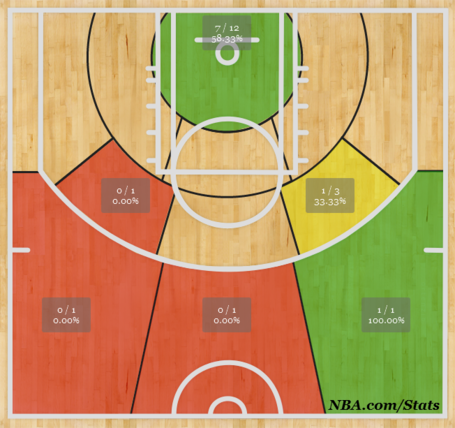 Shot charts like this have become much more of the norm for Teague down the stretch of the season as he has begun to play much more down hill in Atlanta's pick and roll attack. At times Atlanta used an alignment that featured all five players on the perimeter and just dared the Pacers to help. Often when they tried to help it was too late as Teague simply blew past his defender for a layup.

Teague's teammates took advantage of those opportunities. Paul Millsap struggled all season against the Pacers but broke out in Game 1 with 25 points and eight rebounds. DeMarre Carroll logged a double-double with 12 points and 10 rebounds and was 2-4 from three-point range. Kyle Korver added 12 points despite missing a number of good looks from deep. Atlanta outscored Indiana 30-16 in the third quarter with Teague and Millsap accounting for 27 of those 30 points.

As I mentioned earlier, things couldn't have went much better for Atlanta. The Pacers on the other hand continue to search for answers as their second half slump continued.

Indiana shot a respectable 42 percent from the field for the game and made nine three-pointers of their own. However, their vaunted defense was absent as Atlanta met little resistant. The Hawks also controlled the boards for much of the game despite being undersized. Indiana finished with a 46-42 edge but Atlanta finished with nine offensive boards and will likely take that scenario every time.

Following the game, the Pacers were quick to point out that its a long series and that there was still a lot of basketball to be played.

Once they were down, Indiana didn't look like a team playing with much of a sense of urgency. In the lead up to Game 2, they will have to deal with much more of "what is wrong with Indiana" rather than "what did the Hawks do right in Game 1."

The Hawks understand that this still figures to be a long series but on Saturday night they did exactly what they needed to. They played loose and without pressure and took the fight straight to the Pacers. They showed Indiana that if they don't get their problems corrected that they can in fact win this series. That is the competitive spirit that Mike Budenholzer has been talking about all season long.