Atlanta's defensive struggles continue in loss to the Suns

The Atlanta Hawks came up with another great offensive effort but it went wasted due to another lackluster effort on the defensive end.

Share All sharing options for: Atlanta's defensive struggles continue in loss to the Suns

Atlanta fell for the 11th time in 12 games on Sunday in a 129-120 loss to the Phoenix Suns thanks to another lackluster effort on the defensive end of the floor. Mike Budenholzer specifically pointed to his team's transition defense following the game:

"They shot the ball extremely well. They play with great pace, they put lot of pressure in your defense, make or miss," Hawks coach Mike Budenholzer said. "Our transition defense wasn't good enough.

The Hawks were bad in transition no doubt but they actually managed to top Phoenix in fast break points 25-24 on the night. Still when you allow a team to shoot this well then you are going to have a hard time winning. 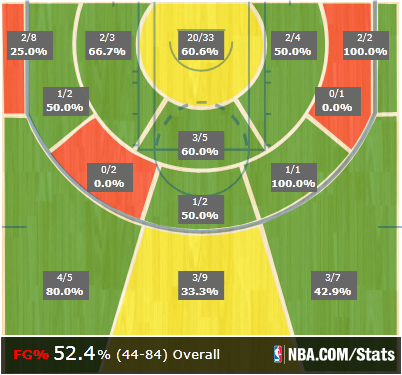 Atlanta's problems are two fold. Sure their frontcourt is banged up but we have also seen slippage in other areas defensively. Phoenix did out rebound the Hawks 34-26 but only had a 10-7 advantage in second chance points. Atlanta's problems of late center on that they have very few defenders that can (or will) stay in front of their man.

Time after time Sunday night the Suns would penetrate Atlanta's defense forcing it to rotate and then kick out for open shooters. Assistant coach Taylor Jenkins talked about it during halftime of the broadcast saying that they were over committed to help.

To combat this, we have started to see the Hawks switch more on screens but that did little more than provide the Suns with mismatches to work against and more opportunities for shooters to be left on the perimeter.

Things did improve in the second half as Atlanta limited Phoenix to just 35 percent shooting in the third quarter. However, a late 7-1 run by the Suns to end the third quarter likely decided the game. That Phoenix still shot 55 percent for the game and was 15-24 from three-point range speaks volumes.

When completely healthy this Hawks team couldn't be considered an elite defensive team. They had success working as a unit and playing aggressive. For this team to snap out of its funk they need to get back to the basics. No gimmicks, just a good solid brand of defense.