A quick look at the college players who announced plans on Monday to enter the NBA Draft.

Three college forwards declared their intentions to forego their college eligibility and enter the draft on Monday: Indiana freshman Noah Vonleh, North Carolina State sophomore T.J. Warren, and Ohio State junior LaQuinton Ross. All 3 players made the right personal decision for various reasons. Here is a quick look at each as an NBA prospect, where they are currently projected in the 2014 NBA Draft, and how they may fit with the Atlanta Hawks. 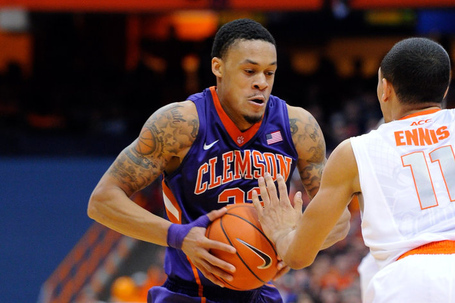 Read all of Patrick Laney's profiles, his big board and the system from which you can identify a star.

Vonleh is a long athlete (7'4 wingspan) who remains a raw prospect. His stock rose quickly in his first college season as he showed better than expected basketball skills early. Viewed as the sixth best fit for the Hawks on the Peachtree Hoops Draft Board, Vonleh had a rough conclusion to his season in Indiana's final five games. He missed 2 games due to injury and failed to get double figures in rebounds or points when he was able to play. Despite those struggles, he still projects to be a top 10 player in the upcoming draft.

A good shot blocker with a quick base and few bad habits, Noah has the potential to be an elite defender. He has flashed enough strength and aptitude to perform well defensively in the NBA sooner rather than later. While still very raw offensively and challenged both in making quick decisions and handling the ball, he has a smooth stroke (49% 3-pt, 72% FT) that sets him apart from other defensive players with his physical abilities. He has shown a willingness to develop as a post player offensively, yet his skills in the post remain limited.

Remaining 18 years of age on draft day, he is highly unlikely to be available when the Hawks are on the clock. Should he somehow slide, it should not take Atlanta long to make their selection. Still a couple of years away from being an NBA starter, some team will get a player likely to develop into a two-way power forward with the potential to be a defensive star. Due to his approach to the game and willingness to commit on the defensive end, Vonleh should have a high enough floor to be a valuable role player if his development stagnates.

Warren was not listed as one of the 22 players on the Peachtree Hoops Draft Board due to defensive limitations and questions about his ability to play a specific NBA position. Warren flourished in the last month leading his team to some big wins in postseason play while improving his reputation as a lethal scorer. He closed the season with 19 consecutive games of 20 points or more including back-to-back 40+ point games in early March. He has an elite ability to make floaters in the lane--a skill not necessary for NBA success but one that should translate well to the next level. His 41-point game at Pittsburgh stands on its own as a prospect highlight reel:

Warren has become a more efficient scorer while increasing his scoring average--a rare feat for a 20-year-old on a team so dependent on his offensive abilities. T.J. is an average passer for his position and an impressive offensive rebounder for his size. His three-point shot severely declined this season, but he also demonstrated discipline in not chucking it amid his struggles. He has a good chance to be a unique offensive player both in his in-between game and as a finisher. He can be a match-up problem offensively at both forward positions if he is able to translate his jumper at the next level--something that seems reasonable if he puts in the work.

His recent stretch of high-scoring performance does little to clarify what position he best fits in the NBA or his capability on the defensive end. Warren lacks quickness but has decent hands on the defensive end of the floor. He is not much of a threat to block shots both by ability or by instinct. His greatest offensive weakness is getting his shot blocked both on short jumpers and when executing traditional post moves.

The vertical nature of the NBA may be his greatest challenge. Lacking the strength or hops to defend power forwards or the foot speed to stay in front of quicker players, T.J. may be stuck as a dreaded tweener at the next level. Currently projected to be drafted some time after the lottery picks, a team will take a chance on him being young enough to improve on the defensive end while he translates his unique scoring talents more easily.

Warren certainly will be added to the PTH Draft Board at the next update. Maybe the best thing to like about him is how much he improved from his freshman to sophomore year. If he can translate his offensive resiliency to both ends of the floor, he could be a steal for a team in the middle to late first round.

While the Atlanta Hawks are most in need of players who can bring a defensive presence on the perimeter, Warren is talented enough to be a player the Hawks have to consider taking in the first round. He will surely be a popular choice among fans and a prospect to keep an eye on as the draft approaches. Unlike other offensive-oriented talents in this draft who have not flashed much defense, Warren still has potential to add those skills going forward. His offensive play should be enough to at least secure him a spot in a rotation by his second NBA season.

Ross declares for the draft coming off a slightly disappointing season and one of the worst games of his career. Scoring only 10 points on 12 shots while committing 5 turnovers in an upset loss to Dayton, his terrible performance was hidden behind the image of Aaron Craft's missed 5-footer at the buzzer.

This season was supposed to be a breakout year for the former high school phenom to use a solid jumper, good athleticism, and elite length (7'1) to be the center of Thad Matta's postseason machine. Coming off a good 2013 NCAA Tournament run which included Ross hitting a buzzer-beater over Arizona, the small forward was perfectly positioned to show the promise hoped for when he arrived in Columbus. Instead, his shooting percentages dropped across the board and most of his statistics per 40 minutes remained level. As he makes the announcement to head to the NBA, he is a likely second rounder who has no assurances of making an NBA roster. Like some of the second-round seniors reviewed last week, Ross could even face not hearing his name called at all.

LaQuinton has shown an ability to be a better defender against bigger players this season and a greater effort rebounding the basketball. He was mostly awful taking care of the basketball in his first two seasons, but made some progress with reducing his turnovers this season. He still remains a player who is largely ineffective when his shot is not falling. Ross still looks a lot like the player he was three years ago when he graduated high school: a shooter with a lot of length and athletic ability hidden behind uneven effort and skill.

While his leaving early may be criticized by some, it is unlikely his stock would have improved with another year of uneven play and poor defensive effort. In regards to selecting Ross, Atlanta is wise to exercise a skill Ross has shown infrequently in his college career: PASS.