Jeff Teague tied his career-high with 34 points in Tuesday's win over the Toronto Raptors but more importantly set the tone early for the Atlanta Hawks.

Share All sharing options for: Jeff Teague sets tone for Hawks in big win over Raptors

The Atlanta Hawks have won a season-best five straight games after Tuesday's 118-113 overtime victory over the Toronto Raptors. Interestingly, the current winning streak comes on the heels of the team dropping 14 of 15. The biggest reason for the turnaround has been health. The second biggest reason is the return to form of point guard Jeff Teague who has been on a tear and capped that off with a career performance Tuesday night.

"I was just trying to be aggressive. We just wanted to win the game really bad. We've been playing really well lately. We're healthy and that's big."

Atlanta hit 6-24 shots in the first quarter and trailed 26-17. The second unit did a good job of not letting the game get away but the Hawks made their move when Teague checked back in the game. Jeff scored 12 of his 34 points in the second quarter and was on the attack from the moment he stepped on the floor. His shot chart from the quarter illustrates his penetration of the Raptors' defense: 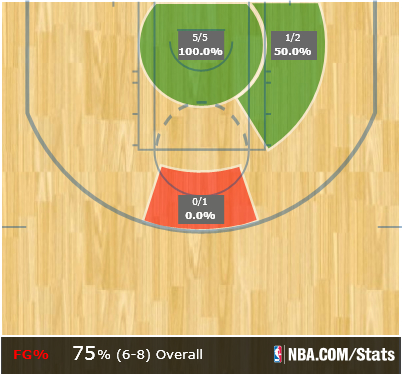 Things didn't improve much from there for the Raptors. Teague's overall line looks just as impressive with 12 of his 18 shot attempts coming at the rim and 15 of the 18 coming from in close. 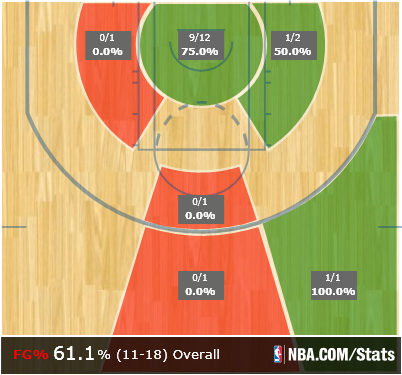 During Atlanta's five-game winning streak Teague has resembled the player he was at the start of the season. He's averaging 19.2 points and 7.6 assists over that span while shooting 48 percent from the field. One thing that has changed is that he has been shooting the three-pointer just a bit better. He's hitting 50 percent of his threes over the last five games. In 14 games since the All-Star Break, Teague is shooting 44 percent from three-point range. This after shooting just 26 percent before the break.

When Teague is hitting the perimeter shot it prevents defenses from laying back in the lane. When they are forced to run him off the line his quickness becomes a distinct advantage.