The Atlanta Hawks extended their winning streak to a season's best four games with a 97-83 win over the Charlotte Bobcats.

The Atlanta Hawks turned in one of their best efforts of the season in Monday's 97-83 win over the Charlotte Bobcats. The win extended Atlanta's winning streak to a season best fourth straight and follows a stretch where they lost 14 of 15. Injuries played a huge part in the Hawks' slide but as they have slowly gotten healthy their defense has been slow to recover. Monday's win over the Bobcats was one of their best defensive performances of the season.

"I think we have been talking about improving our defense going down the stretch here," Budenholzer said. "The activity and the effort and the commitment on the defensive end in the second half allowed us to beat a very, very good team tonight. That's something that we want to continue to build on and continue to improve as we go down the stretch here."

The turning point came in the third quarter for Atlanta where the Hawks were able to clamp down and turn a 52-46 halftime deficit into a 76-68 lead. Charlotte made just 4-21 field goal attempts in the period and were outscored 30-16. 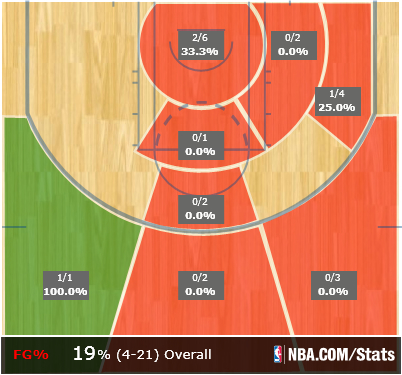 Atlanta did a good job of forcing the ball to the right side of the floor. Charlotte attempted just one shot from the left (and made it) in the quarter. Its a lot easier to set the defense when the offense fails to move the ball. 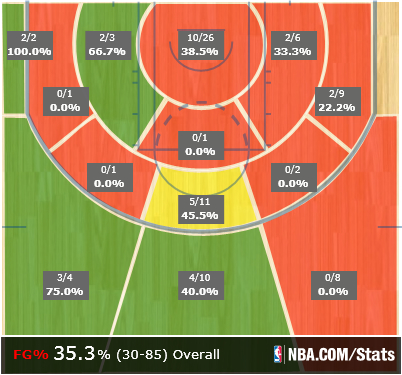 If you take a look at Charlotte's chart for the entire game then you see that only 11 of their 85 shot attempts came from the left side of the floor. Part of that is probably on the Bobcats but the Hawks' defensive effort played a huge part as well.

So much of what Charlotte does offensively goes through Al Jefferson and Atlanta harassed him into a 6-15 shooting night. He still finished with 16 points and 12 rebounds but was hardly the factor that he has been of late. The lack of movement put the Bobcats up against the shot clock and forced Kemba Walker to make something happen.

Perhaps even more important for Atlanta was their winning the battle in the paint. The Hawks out rebounded Charlotte 51-42 and played them even on the offensive glass. Atlanta finished with a 14-7 edge in second chance points and outscored the Bobcats in the paint 38-24.

With the win, the Hawks pull to within 1.5 games of the Bobcats for seventh place in the conference and extends their lead to four games over ninth place New York. Atlanta has won two straight on the road after dropping their previous 10 away from Philips Arena.