There has been much talk about a new logo for the Atlanta Hawks and another article does a great job of shedding light on it. But will Hawks fans like it?

Full disclosure: Like many, many Hawks fans, I am married, happily, to the old Pac-Man design of the Atlanta Hawks. Everything about that era, from Dominique to the unequaled jersey design to the Pac-Man himself makes me happy in the maximum way a uniform should to a fan.

So when the Hawks did the Chutes and Ladders look, I was hugely disappointed, but alright, Nique made it work and so did Mookie, so not great, but I lived with it.

Then to the Hugging Hawk and finally to the blahness of the Kruger era Hawks, which made the eventual change to the generic looking current unis seem fabulous.

Now, Demetrius Bell (@fergoe) at Sportslogos.net did a great job of looking at the sneaks and leaks of a New Hawks Logo, featured in the video game, NBA2K14, with screenshots from @larryluk, another excellent Hawks Twitter user.

Here's Bell talking about the logo:

Meanwhile, the logo itself looks to be an updated version of the old "Pac-Man" logo that the Hawks used as their primary logo for the better part of the two decades. The main difference between the update and the old logo is that the Hawk in the new logo is much more pronounced and visible than in the old design, which explains why it was referred to as the "Pac-Man" logo. So if anything, it appears to have a bit more in common with the funky, blue-&-green predecessor to the "Pac-Man" logo.

Here is a look, courtesy of @larryluk's Twitter page, at the new logo. 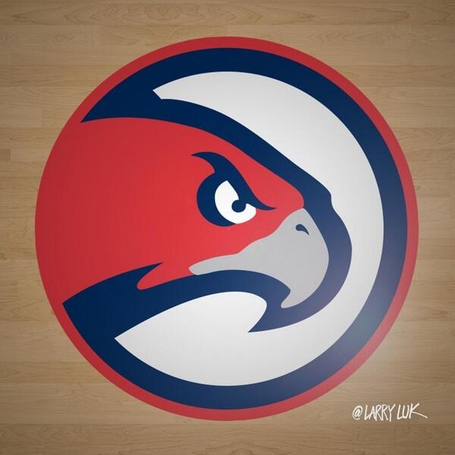 Also highlighted in Bell's piece is the possibility of the lane being painted differently, so check out the article and give a follow to both Bell and Larry, excellent Atlanta sports fans and good at the Twittering.

Old Fashioned Exit Question: What say you, ATL? Time for a new logo? Unis? Lane Paint? You like this one?

As Chevy Chase once asked Randy Quaid in Christmas Vacation, "Think it really matters, Eddie?" To which I say, it does, Clark.....oh yes, it does.