The Atlanta Hawks drop their second straight with a 105-100 loss to the New Orleans Pelicans.

The Atlanta Hawks saw their three-game road winning streak come to an end Wednesday night with a 105-100 loss to the New Orleans Pelicans. The Hawks put themselves in position to win but some late struggles offensively and some key baskets by Anthony Davis and Brian Roberts sent them to another loss.

Atlanta's offense has been its constant this season while its defense has fluctuated. When the Hawks are able to dig in defensively that has usually translated into some pretty good performances. Atlanta never really found its footing on the defensive end of the floor Wednesday night except for a stretch late in the first half. The Hawks trailed by eight midway through the second quarter but clamped down to finish the half on a 16-4 run to take a 51-47 lead.

More from our team sites

More from our team sites

Atlanta led by as many as seven points in the third but were never able to put the Pelicans away despite lighting it up from three-point range. The Hawks made 11-21 attempts from beyond the arc through three quarters yet were clinging to a 75-71 lead.

New Orleans used their size advantage inside to remain within striking distance. The Pelicans finished the game with a 50-38 rebounding edge including a 13-7 edge on the offensive glass. New Orleans doubled up Atlanta in second-chance points 14-7 but their length also made it tough on the Hawks to score inside.

Atlanta attempted 41 shots at the rim but were only able to convert 20 times. They were getting the looks they wanted they just weren't able to cash in. 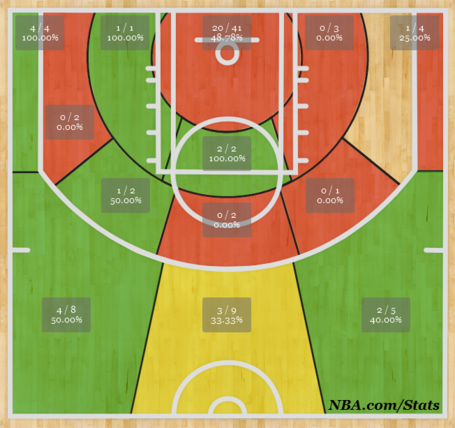 This video is a good example as Jeff Teague gets around the screen but is forced to shoot over Alexis Ajinca on the attempt.

Only two of Teague's 14 attempts would come away from the paint and its worth noting that two of his makes came late as the Hawks were trying to keep it close with New Orleans guarding the perimeter. Teague's shot chart shows exactly what Atlanta wants from him but the shots just didn't fall and New Orleans' length had a lot to do with that. 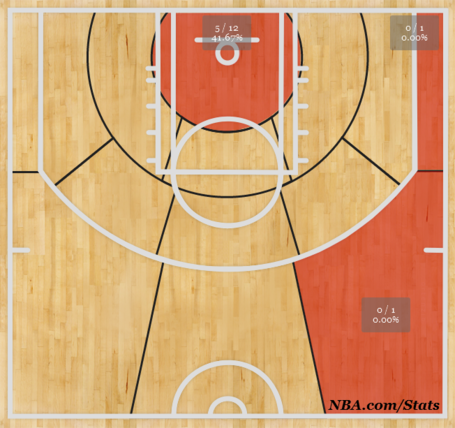 It wasn't just Teague that struggled. Mike Scott went 4-7 from three-point range but was just 1-4 at the rim. The point is, the Hawks had their chances to put New Orleans away and wasn't able to do it. When you let a team hang around like that, particularly at home, then you are usually asking for trouble.

That is exactly what Atlanta got in the fourth. The Pelicans began the period with a quick 5-0 run to take a 76-75 lead. The Hawks quickly righted the ship and went back up seven before the wheels came completely off. A 9-0 run by New Orleans erased Atlanta's lead and they were left scrambling for the remainder of the game.

New Orleans outscored Atlanta 34-25 over the final 12 minutes. Atlanta shot 10-23 from the field but were just 3-9 from deep after shooting so well for the first three quarters. A lot of that had to do with shot selection as the Hawks seemed to lose some of their poise as the lead slipped away.

The Hawks will get two off days to work on their issues before a home matchup against the Memphis Grizzlies on Saturday. The schedule doesn't lighten up heading into the All-Star break with two critical Eastern Conference matchups looming next week with a trip to Chicago and Toronto looming.