Mike Scott continues to improve for the Atlanta Hawks

Despite being snubbed for the Rising Stars Challenge at NBA All-Star Weekend, Mike Scott is emerging as a key player for the Atlanta Hawks.

Share All sharing options for: Mike Scott continues to improve for the Atlanta Hawks

Mike Scott won't be going to New Orleans for the Rising Stars Challenge, but he is quickly emerging as an integral part of Atlanta's success this season. He's taken advantage of extra opportunities afforded to him due to Al Horford's season-ending injury and is putting together quite a sophomore season in the process.

Scott was drafted in the second round of the 2012 NBA Draft out of Virginia and entered the league with few expectations. He played sporadically as a rookie, appearing in 40 games while averaging 4.6 points per game.

He came to training camp this season on a non-guaranteed deal and didn't appear to be a lock at making the roster. Scott worked hard on his game during the offseason, dropped some weight and added range to what was already a good jump shot.

Scott took his game to another level in January where he averaged 13.4 points and 4.2 rebounds in 13 games. He scored in double figures in 12 of Atlanta's 13 games and helped to offset the loss of Horford offensively. Despite the extra opportunities, Scott has remained efficient and upped his shooting percentage to 53 percent and 36 percent from three point range.

His shot chart for January shows just how aggressive he has been in the paint area: 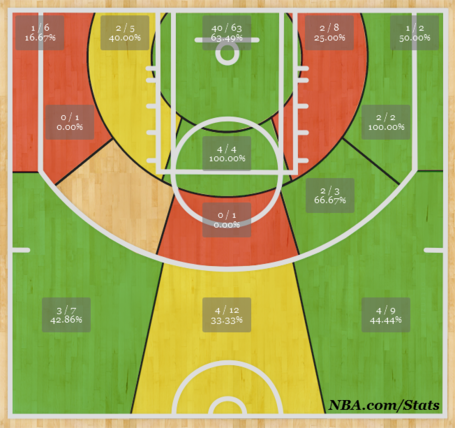 Scott has done most of his damage from the paint and the three-point line. It's becoming routine to see him sprinting ahead in transition and showing off his athleticism on the break.

Without Horford, Mike Budenholzer has closed a lot of games with both Scott and Paul Millsap on the floor together. He's proven fearless at taking big shots during crunch time and knocked down a big 3-pointer in Saturday's win over the Timberwolves.

Scott's improvement is a testament to his work ethic but also the focus that Atlanta has put into player development. One area where there is room for improvement is defensively.

"I think defensively is an area where we've really been talking to him about improving and that's an area that if he can take some strides and take some steps, he gives us so much on the offensive end," said Budenholzer. "He's a unique player offensively."

Some of that improvement can come with more meaningful minutes with Atlanta's starters. More will come with additional experience and focus.

"Offense comes natural to me, I'm an offensive player, so one of the challenges as a player is to get better on the defensive end. That's just something I want to continue to work at."

A lot of people nationally aren't paying attention to the strides that Scott has made, but those that follow the Atlanta Hawks day in and day out understand how important he has been. The Hawks went 6-7 in January despite a brutal schedule and are 9-8 since Horford was lost for the season. Mike Scott is a big reason why.