Sir Foster was the talk of the NBA All-Star Weekend, so we wanted to catch up with our favorite in-house superstar.

What a difference a year makes!

Last year, we ran a feature on a locally popular, but still rather unknown in-house organist for the Hawks, Sir Foster.

We highlighted his creativity, the spark he brings to the game and the man himself.

Getting to know him better only enhanced our appreciation for the unique work and experience he brings to the Hawks faithful, game in-game out.

Little did we know then that the national stage awaited and his greatness was just beginning to be discovered.

After the Hawks brutal game in London again the Nets, NBA types picked up on Foster and brought him to the NBA All-Star Game, where he rocked it and got many folks who likely wouldn't have even paid attention to such things to take note.

But we're not going to tell all the tales about the Weekend or what it all means or who became a Sir Foster fanboy/girl like we've been here at Peachtree Hoops.

No, we caught up with the busiest man in Atlanta and he dropped some extremely informative and thoughtful responses for us to enjoy.

Peachtree Hoops: How did you get the invite to be the house organist for AS Weekend? Any issues with being able to go?

In January the Hawks had a game against the Brooklyn Nets in the O2 Arena in London. They took our crew because it was technically considered to be a Hawks home game, so I went along with our mascots and cheerleaders. The NBA was producing the game, so I had the opportunity to work with the league for the first time. They liked what I brought to the game and they asked me to play at the All-Star game, which was a dream come true for me!

As for issues with being able to go, Atlanta had snow and ice during the week I was supposed to leave. My flight got canceled and we had to keep rescheduling it. After going through so much stuff just to get there, I had a feeling that my time in New Orleans would be special.

PH: Who came with you to New Orleans?

One of our dancers, Rose, got invited to be a part of the All-Star dance team. Harry the Hawk also made the trip.

PH: Didn't New Orleans have their own in house music -- was there trouble there? Haha!

[Laughs] No, there was no trouble at all. The NBA brought in two other guys: TJ the DJ from the Brooklyn Nets, and another DJ named Dan Demiglio who has worked with the league office in the past. It was an absolute pleasure to work with those guys. The soundmen and crew in New Orleans were awesome as well.

PH: Knowing you always prep before the game, how did you prep for all the different events -- did you do anything differently for the different days or for different people?

I tried not to change anything; I wanted to keep my routine as close as I could to what it has always been. However, for All-Star events you have to be at the arena much earlier than you do for regular season games, so I ended up doing a lot of my prep work at the arena.

PH: Did any of the guys recognize you?

It's funny; I didn't meet many of this year's All-Stars, but I met a lot of former players. I took a picture with Clyde Drexler, I met John Starks from the New York Knicks, and I ran into Dr. J. Former Hawks Jerry Stackhouse and Steve Smith were at the game and they did recognize me.

PH: Did you get special requests during the weekend from teams, players, celebrities?

One of the most memorable things that happened to me was this: at halftime of the All-Star Game, I checked my phone and realized that Bomani Jones from ESPN had tweeted me. He asked me to play "Whistle While You Twerk" by the Ying Yang Twins. Honestly I had never played it before, but I did it and he tweeted me back. The next day he had me on his radio show.

PH: The feedback you've received for your work during the weekend has been extremely positive -- who has reached out to you directly to give you praise??

In addition to the Bomani Jones and Dan Le Betard radio show, I did an interview with SLAM magazine immediately after the game. A few other people reached out: GQ did a piece on me. The Sporting News also did one. I was really thrilled to do an interview with The Source magazine! My friend and I used to always read The Source growing up, and we always wanted to be in it. I accomplished one of my childhood dreams, so that was huge for me.

PH: How do you feel about that response?

I am humbled by it. It feels wonderful to know that people really enjoy what I do. I sincerely appreciate everyone who has reached out to me, whether it be via twitter and instagram (@sir_foster) or otherwise, to show love.

PH: Has this opened up anything else for you beyond the Hawks?

Yes! People have definitely been hitting me. I've been much busier since the All-Star weekend. Speaking of which: I'm actually going to be playing at some UGA Baseball games coming up. I'm excited about the challenge. I've also been in the studio a lot more, because people have been reaching out and wanting to hear my tracks. So hopefully that part of my career can start to escalate as well.

PH: What's next for you?

I can use one word to sum it all up: MORE. More of everything. I've just gotta keep climbing. I plan on spending a lot more time trying to focus on my production and songwriting. I also started a band, Revolve.R (pronounced Revolver). We play a very high-impact brand of r&b mixed with a small touch of jazz. We really get the audience involved. I'm very excited about the possibilities with this band! We do all types of events; email me at wewantsirfoster@gmail.com if you want more info.

PH: If your plans are to take you beyond the ATL, what can we do to keep you here? You can't go!!! The people have spoken and they're worried your national fame will take you away!

[Laughs] I love Atlanta. I absolutely love it here. There's no other city like ours. I am totally open to expanding what I do and traveling to different places, but I don't see anything that would cause me to pack up and go at this point. This is definitely my second home, second only to Fort Valley, GA which is where I'm from.

PH: Man, we're all proud to know you and were hyped when we heard you were there. The whole crew at Peachtree Hoops loves your work and appreciated the time you provided us last year and today.

Thank y'all so much! It is always a pleasure to talk to y'all. And I'm glad I can make you proud. 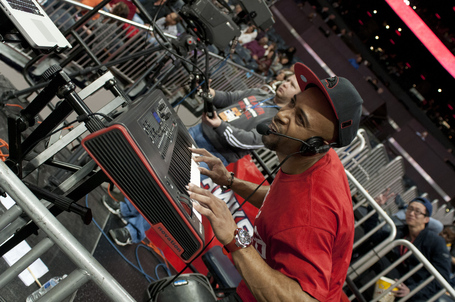 Next Up In NBA