Mike Scott posts career-high in win over the Knicks

Mike Scott scored a career-high 30 points while helping the Atlanta Hawks snap an eight game losing streak. Here is a closer look at his big night and why he was successful.

Share All sharing options for: Mike Scott posts career-high in win over the Knicks

Mike Scott turned in a career-best performance on Saturday when the Hawks needed him the most due to Paul Millsap's injury. Scott scored a career-high 30 points on 11-14 shooting including 6-7 from beyond-the-arc to help fuel Atlanta's 107-98 comeback win.

"We were down Paul, down so many bodies, it was great for everyone to come out and play and finally get a win."

A quick glance at Scott's shot chart for the game reveals just how effective he was in Atlanta's pick and roll and pick and pop. 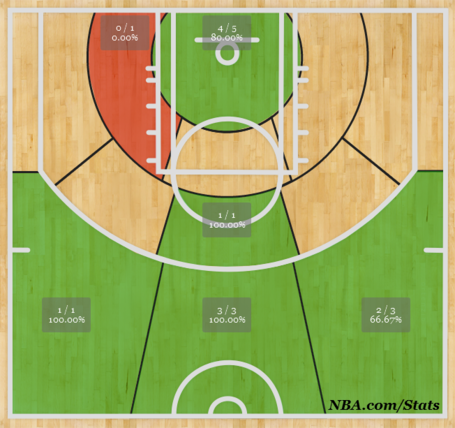 The Hawks went small for a lot of this game out of necessity due to injuries in their frontcourt. Scott was able to use his speed and quickness as an advantage against bigger but slower New York defenders.

On this play, Scott executes the pick and pop with Shelvin Mack. Amare Stoudemire slides into help position on the pick but is too slow closing out to Scott who knocks down the triple.

With a closer look you can see just how much room Scott has to line up his jumper.

This next example highlights Scott's ability to move without the basketball along with some of the defensive issues that the Knicks are having late this season. This is where Scott's range can really test bigger defenders who have to make sure to close out to the three-point line. Here Scott catches Jeremy Tyler out of position and slips the screen for a nice look inside.

Here you can see just how bad out of position Scott catches Tyler. This is a great example of Scott using his quickness effectively against a bigger and slower defender.

This final clip ends with Scott knocking down another three but it is a great example of Atlanta's unselfishness and quick ball movement. The entire sequence is set up by DeMarre Carroll's penetration which puts the Knicks into scramble mode.

Korver swings the ball to Teague who passes up the shot to set up Scott with a better look. If you look closely, Scott has Lou Williams available for another pass had New York's defense recovered.

We talked earlier this month about the progress Scott has made this season. He's been a reliable scoring option off the bench for the Hawks all season. He is now averaging 9.7 points per game but its his 49 percent shooting from the field that stands out. Particularly when you factor in he is a 37 percent shooter from three-point range and knocks down 83 percent of his free throw attempts.

Not bad for a guy who came to training camp without a guaranteed deal.