The Push to Make Pero Antic an All-Star

Can the Macedonian make the Rising Stars Challenge?

Share All sharing options for: The Push to Make Pero Antic an All-Star

Macedonian rookie Pero Antic has made quite an impression on the Hawks this season, especially in the absence of Al Horford. He's had dedicated crowds of Macedonians at many away games, eager to see the country's first NBA player.

Given his huge following and good play, there's been a push to have Antic participate in the Rising Stars Challenge at the 2014 All-Star Game. The biggest push may have come from this super fan, Ivan Menkowski, as pointed out on the Hawks Basketblog.

The Antic superfan has offered to fly to America and mow Shaquille O'Neal and Charles Barkley's lawns for the rest of the season, playoffs included, with NAIL SCISSORS, if they can help get Antic selected for as a Rising Star. Never mind the fact that Shaq and Chuck merely draft their own teams from the rookies and sophomores that assistant coaches select, this is incredible. Someone painted the message onto his body!

In a more, ahem, normal effort, a group of Macedonian fans have set up a Facebook page with the same goal in mind. The "Dear Shaq & Chuck, please select Pero Antic for the All-star game" page, already with over 4,000 likes, is filled with memes and stats to help Antic get recognition and hopefully participation. 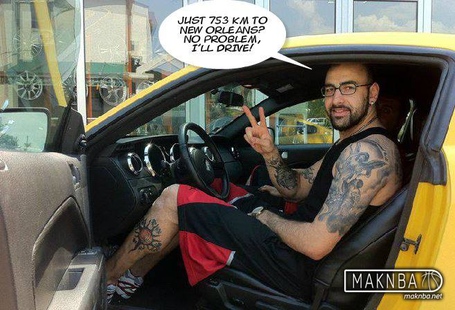 I think with these sensational efforts, plus a weak draft class, he has a real chance. I've already liked the page in hopes it helps us have some form of Atlanta All-Star representation. Fingers crossed for Pero!