Lou Williams still working his way back from knee injury

Lou Williams told the AJC on Monday that he has been "feeling his way around" since returning from last season's knee injury.

Share All sharing options for: Lou Williams still working his way back from knee injury

Lou Williams returned to Brooklyn Monday night for the first time since he suffered a season-ending knee injury last season. Williams' play has been up and down this season with a couple of offensive outbursts sprinkled in between many ineffective nights. He talked about his return from ACL surgery and finding his game with the AJC's Chris Vivlamore on Monday:

"I've turned into a jump shooter," Williams said. "I've relied on a lot of jump shots. In the past, I've been able to slash. I've been a guy who can get to the rim, get to the free-throw line. I think as I get healthier, those are the things that I'm going to have to put back in my game.

"It's not going to be my game. It's been thus far because I've been trying to feel my way around, work on my health and get my confidence back. Now, is the time I have to turn the corner and play the way I'm used to playing."

A quick glance at Williams' shot chart confirms what he is saying. 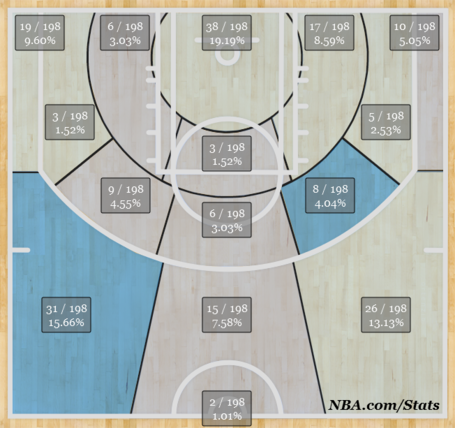 Just 19 percent of Williams' attempts are coming at the rim this season and most of them are from mid-range and beyond. Part of the appeal of Lou when he was acquired was his efficiency and the frequency that he got to the free throw line. The Hawks need him to get back to being that type of player but the question is can he and how long will it take?

He has shown no ill-effects from the knee injury physically so there is no reason to suspect that he can't get back to being the same type of player he was before the injury. Often with severe injuries, the mental hurdles are the biggest ones a player faces. The fact that Lou is acknowledging what he has to do is a positive sign.