Forbes recently released their 2014 franchise valuations for the NBA. The Hawks come in at 27th place with a current value of $425 million. How has this fared across the years for the Atlanta Spirit Group?

Well this seems to be a fair trend upward. From the chart above, the Atlanta Spirit Group controlled the Hawks in 2005. They purchased the Hawks, Thrashers, and operating rights to Philips Arena in March of 2004 for $250 million, although they acquired the debt of the Hawks and Thrashers in the process as well. It is difficult to unbundle the purchase price to see how much the Atlanta Hawks were valued by the Atlanta Spirit Group at their time of purchase.

While we see that the Atlanta Spirit Group has increased the value of the Hawks (as measured by Forbes), it is helpful to compare this with the other franchises in the NBA. 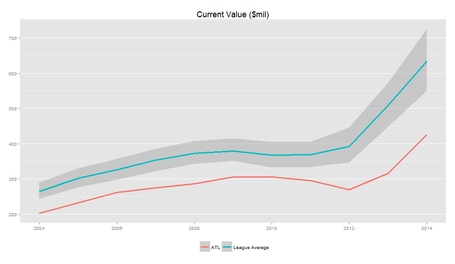 Of note, the values in 2012 reflect the 2011-12 lockout season. We see a sharp increase after this season which, in part, reflects that the new CBA is more beneficial to NBA Owners than the previous. But how have revenues changed over time? 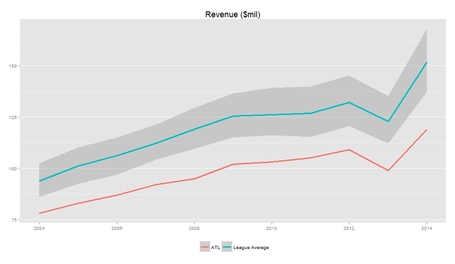 As a whole, the National Television deals between the NBA and Turner Sports and ESPN are shared collectively. There have been two TV deals throughout this time, the first lasted between 2002-03 season to 2007-08 season and valued at $4.6 billion over that time. Then in 2007 an agreement was reached for the 2008-09 season to 2015-16 season between the same providers which was valued at $7.44 billion over that time frame. These account for a large chunk of increase from revenues over that time, but the difference between the Hawks and the League Average lies mainly in ticket sales and local television deals. Keep in mind, the revenues for the 2013 season declined because that is related to the revenues in the 2011-12 season. There were 240 fewer regular season games because of the lockout.

While it is correct to interpret the Atlanta Spirit has been below average with respect to other NBA Owners, it is important to recognize that they are below average compared to a highly successful group of individuals. So this interpretation effectively says they are in the top 1% and not the top 0.5%. That is still pretty darn good if you ask me.