The Hawks got back to basketball duties as they practiced at the O2 and met with the media.

Share All sharing options for: Hawks in London: Day Three

The Hawks spent a lot of yesterday prepping at the O2 prepping for today's game against the Nets. Over 100 media members were present to check out the team.

Anyone from the media interested in our #ATLondon practice? We can't tell... pic.twitter.com/mvvr9vxigk

This video from the NBA has some footage from the guys sightseeing and at practice, if you can handle watching the Nets enjoying themselves, too:

You can watch a little 5-on-5 that The Lottery Mafia filmed:

A lot of media attention was on Kyle Korver and his streak. I could watch this video of him making threes all day:

After practice, they joined forces with the Nets to hold an NBA Cares clinic for a big group of kids. 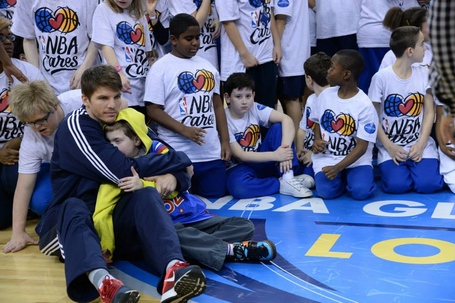 @nbacares is making crazy noise in London with @officialmutombo helping the kids out at O2 Arena pic.twitter.com/TZbbJFu1kQ

We and the @BrooklynNets participated in an @nbacares clinic this morning for children here in London! #ATLondon pic.twitter.com/hl5qwkMXlk

Hopefully all that time spent at the O2 will translate to a big win this afternoon. So great that they took the time to spread the NBA Cares initiative overseas. How fun for those kids!