One change the Atlanta Hawks didn't make this summer was at point guard where they elected to match a 4-year, $32 million offer for Jeff Teague.

Restricted free agency can be a cruel business for players especially when their incumbent team is holding as much or more cap space than any of the others on the market. That was certainly the case for Jeff Teague who languished during the free agency period with teams showing very little interest in large part because the Atlanta Hawks were likely to match any offer. Finally it was the Milwaukee Bucks and his old coach Larry Drew that stepped up with a four year offer that Atlanta eventually matched bringing Teague back into the Hawks' fold.

That it was Drew that seemingly came to Teague's rescue is somewhat ironic. Fans in Atlanta have imagined a somewhat tumultuous relationship between Teague and Drew over the last three years. I never recognized anything that would suggest that was the case but speculation persisted. Drew's interest in Teague after moving on to Milwaukee should quiet that talk forever. 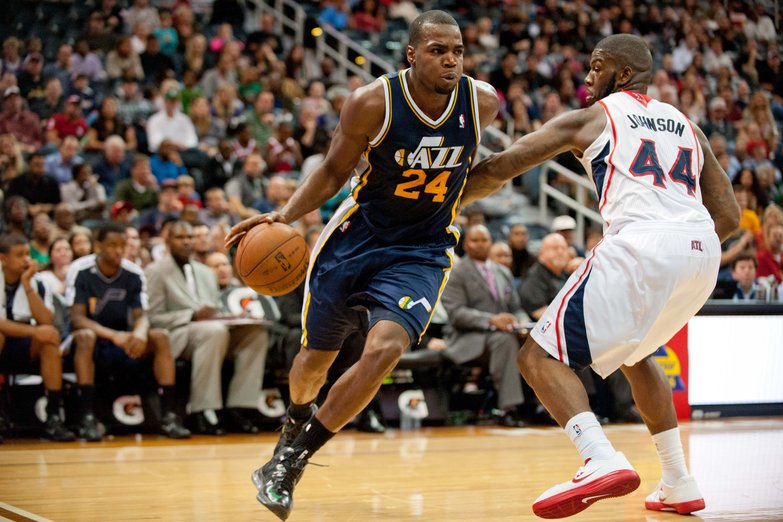 Will the Hawks miss a beat with Paul Millsap replacing Josh Smith?

I don't want to say that Teague being still with the Hawks is surprising but there was a point this summer when the silence by the Hawks seemed to suggest that they were moving on. Dennis Schröder's presence on the roster will help fuel trade rumors for Teague over the remainder of his new contract. Schröder isn't likely ready to take over Atlanta's point guard duties next season and Teague was the best option on the market for the Hawks.

Teague enjoyed his best season of his career in 2013 where he played in 80 games and recorded career high averages of 14.6 points and 7.2 assists. He was able to hold onto the job despite the presence of veteran Devin Harris and became a key component in Atlanta's offensive attack. All of those numbers could continue to climb this season as Teague's role continues to expand under new head coach Mike Budenholzer.

When SB Nation NBA did their top 100 players of 2017 feature, I wrote that Teague's future in Atlanta was likely tied to how Schröder and how he develops over the next two seasons. Its also worth talking about Schröder now as well. In the short term Atlanta's point guard situation should be in great shape with Teague as a young veteran and Schröder as a dynamic young player off the bench. It should be a solid 1-2 punch for at least two seasons.

Teague's new deal was for four seasons. If Schröder deems him expendable in two seasons then Teague will still only be 27 years old and on a two year deal that will most likely still be attractive provided he continues to show improvement as a player. That is a good situation to be in if you are the Hawks.

Here is a look at Teague's numbers alongside two other point guards to whom he is often compared:

As you can see, Teague more than held his own with both Jrue Holiday and Ty Lawson last season. At the very least they are comparable and both Lawson and Holiday most times had a bigger role in their respective teams offense.

The advanced stats from last season lessons the gap even further. Teague's 6.1 overall win shares was good for third on the Hawks as was his PER of 16.8. Also factor in that Teague has appeared in more playoff games than either Lawson or Holiday in their career. Teague's $32 million deal looks like a much better value than Holiday's $41 million and Lawson's $48.

Bringing Teague back turned out to be the safest move the Hawks could make in the long run. Many won't like how the process went down but that is the reality when it comes to restricted free agency in the NBA.

EXIT QUESTION: What is your opinion of re-signing Jeff Teague and what are your thoughts about the Hawks' point guard position going forward?