The Atlanta Hawks are rumored to be a strong suitor for Milwaukee free agent guard Monta Ellis.

Marc Stein reports that the Atlanta Hawks are a "serious suitor" for Milwaukee Bucks shooting guard Monta Ellis and could look to sign him to a short deal with their remaining salary cap space. Stein also reports that the Hawks have given thought to center Andrew Bynum but that Ellis appears to be the top target. 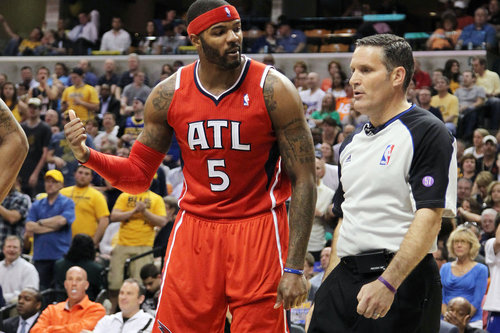 Josh Smith is leaving Atlanta and heading for Detroit, where I hope he finds the validation he's long searched for.

With the future of restricted free agent point guard Jeff Teague still uncertain, Atlanta has roughly $10 million in available salary-cap space to potentially use on Ellis. Sources say that the Hawks have also given center Andrew Bynum some thought, but all the latest signals suggest that Ellis is the Hawks' top current target.

The Hawks were heavily involved in rumors surrounding Ellis at the trade deadline in discussions for forward Josh Smith who has since signed with the Detroit Pistons.

From a basketball sense this makes no sense to me. Ellis is an inconsistant and inefficient scorer who needs the ball in his hands to succeed. Even if he is cast as a sixth man that duplicates in a lot of ways what the Hawks already have on the roster with Lou Williams. If this report is also true then it appears much more likely that Jeff Teague may be forced to play on the qualifying offer next season.

Of course there is another way to look at it. If Danny Ferry can grab Ellis on a short two-year deal he will maintain flexibility and the signing could be seen as a building of assets. The only reason that Ellis had any value at the trade deadline was because he was an expiring contract. Teams in need of scoring would look more favorably on Ellis if he isn't signed to some exuberant contract.

In the meantime though it will be up to Mike Budenholzer to fit the strange array of pieces into something that is workable.