The End of an Era: Josh Smith leaves for Detroit

Josh Smith coming to an agreement on a four year, 56 million dollar deal with the Detroit Pistons means his nine-year career with the Atlanta Hawks has come to an end, leaving behind a polarizing legacy in his hometown.

Share All sharing options for: The End of an Era: Josh Smith leaves for Detroit

For nine years Josh Smith was the constant in the Hawks locker room. J-Smoove was one of the most polarizing figures for Atlanta sports fans, as his mercurial play on the court led some to love him and others to loathe him. He brought an exciting brand of basketball to the Philips Arena floor, and it was that style that gave birth to "The Highlight Factory." He could wow the crowd in an instant with thunderous dunks and blocks, but could just as quickly elicit an audible "Noooo!" from the Philips faithful as he launched a long, ill-advised jumper. With today's news that Smith had agreed to a four year, 56 million dollar deal with the Detroit Pistons, Atlanta's own Josh "J-Smoooooove" Smith, is a Hawk no more, and, despite being expected, is very strange.

Smith's legacy with the Hawks will be heavily debated. For many, Josh will go down as one of the best to ever don a Hawks uniform. He is in the top-ten in nearly every statistic in the Hawks' record book: 9th in games played, 5th in minutes played, 8th in points scored, 7th in field goals made, 8th in field goals attempted, 9th in free throws made (I know, weird), 7th in free throws attempted, 7th in total rebounds, 6th in offensive rebounds, 3rd in defensive rebounds (rebound stats not split up prior to 1970s), 8th in three-pointers made, 7th in three-pointers attempted, 5th in steals, and 2nd in blocks.

For the others, they will remember Smith for the failures. The multiple first round exits, the failure to make an all-star team (which really shouldn't be put on him, *glares at voters*), the inability and unwillingness to reign in his shot selection (aside from 2009-10), the mental gaffes, and the poor decision making. They'll hold on to their resentment for Josh long after he's gone, and will likely be the few in the crowd that boo him on his return trips to Atlanta.

I hope fans remember what he did for the franchise and the community. Off the court, Josh was one of the most giving athletes Atlanta's seen. On the court, e played on some of the best teams in Hawks history and was one of the major reasons the Hawks became a consistent playoff team after wallowing in misery during the early 2000s. He gave us some of the most exciting moments in Hawks history, like this one that I was lucky enough to witness in person.

I'll always hold Josh highly as both a player and person. My personal interactions with Josh were usually good, and almost always entertaining. It would get tense from time-to-time when I would ask him about shot selection or a mental error in a game, but I always appreciated the passion that he approached the game with. Off the record, Josh was always one of my favorites to talk with. He loved to talk about basketball, tell stories, and make jokes. He was one of the most personable superstars in the league and I'll remember him for that.

How should we remember Josh's time in Atlanta? I hope it is remembered for what it was: An exciting, fun, frustrating, and occasionally infuriating time to be a Hawks fan. On the court, it was impossible to call Josh a one-dimensional player, so his legacy cannot be pinned down as just one thing. He was, and always will be, Troll Smoove. 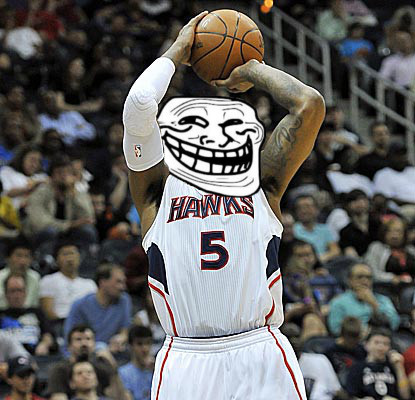 (As always thanks to @bochurney for the photoshop)

In his time in Atlanta, Smoove was the ultimate "No, no, no, no...Yes!!!" player. He was the frustrating enigma that could never truly be defined. A player that could exhilarate and nauseate the crowd on subsequent plays. That will forever be the legacy of Josh Smith for me. Smoove was the player that elicited the most emotions from me as a fan and writer: joy, confusion, anger, frustration, excitement, etc, and I'll miss him because of it.