What to think about these two new signings and how does Millsap compare with Josh Smith?

It's never who you think.

The Hawks rebounded from missing out on Dwight Howard and immediately went to Plan B, which was to raid the Utah Jazz and take two of their forwards away.

Both are hard working, efficient players who should play productive basketball, even if they don't overwhelm you in the process. That's not going to be very sexy in Atlanta, where they like their stars and big names, but they may be the type of players you'll see coming through Atlanta as Danny Ferry and Mike Budenholzer build their franchise.

Millsap has long been a durable, solid performer for the Jazz, while playing alongside Jefferson. He has allegedly bristled at playing small forward, playing almost all of his minutes at power forward last season.

This would seem to mean that, if the season started today, which it doesn't, but if it did, Al Horford would be playing center again for the Hawks. 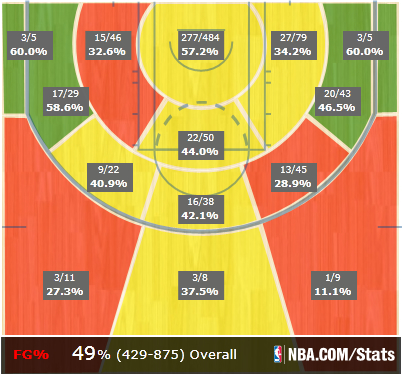 The value of Millsap is his hard work, his ability to do many, things, across the board.....without shooting you out of efficiency. Millsap is going to be compared to Josh Smith, so let's take a look at the same two tables head to head and Josh's shot chart. 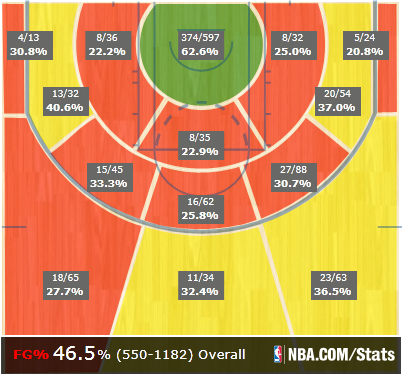 So Millsap is as efficient overall as Josh without maiming the offense and costs likely about 60 percent of the cost and for a shorter time (2 years) as compared to Josh (4 years).

Overall, given the length of contract, efficiency and productivity of the player and the cost, it's a good signing for Ferry.

As for DeMarre Carroll, he fills that Corey Brewer type wing role we've been talking about. Carroll, at 2.5/year for the next two years, will be a rotation wing that will be asked to play defense and knock down shots, though he has not been a dead on shooter from 3-point range, even during his good year last year (29 percent).