From the overnight...Chad Ford chimed into a busy free agency period to talk about tanking, and included the Atlanta Hawks as a team that would likely join in the tanking for 2013-14.

Share All sharing options for: NBA Rumors: Chad Ford says Atlanta Hawks will tank if they don't get Howard

From Twitter last night, ESPN's Chad Ford thought he would interrupt the Kings' withdrawl of their offer to Andre Iguodala to talk about tanking:

I think we may all be UNDERESTIMATING number of teams considering tanking this year. Been flooded with calls from GMs re 2014 draft class

Interest in 2014 draft class is unprecedented. We're going to have a lot of REALLY bad teams this year. #tank-a-polooza

And now our heroes join the conversation....

We know Suns, Bobcats, Sixers, Celtics & Magic will be REALLY bad. Sources say add Hawks to list. If they don't get DH12, likely to tank

Wait, what? The Hawks are likely to tank intentionally or they will be in the lottery due to only having Al Horford, Louis Williams, John Jenkins, the qualifying offer of Jeff Teague, this year's draft picks and then non-guaranteed players such as Mike Scott, Shelvin Mack and DeShawn Stevenson?

Because, that would likely not get the job done in tanking, unless Horford, Williams and company suddenly got involved in a year long case of the stomach flu.

There are some that are arguing the merits of making sure the Hawks don't make the playoffs, thereby affording them a raffle ticket into a pretty hyped draft class.

We'll have our own NBA Draft Prospects section on the site this year, due to the depth and interest in this class and beyond. Top prospects in this draft class includes Kansas' Andrew Wiggins, Kentucky's Julian Randle, Arizona's Aaron Gordon, Oklahoma State's Marcus Smart and Duke's Jabari Parker.

Get the Latest Free Agent Rumors 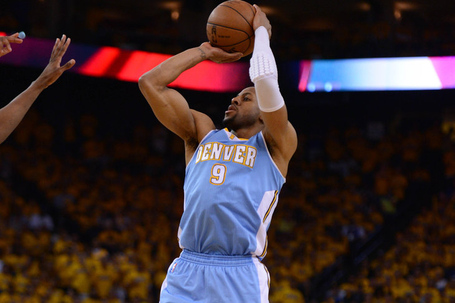 Are you missing the latest free agent rumors? We've got them covered.

Still, it's hard to see how the Hawks will intentionally do this, even if they don't acquire Howard. Rumors have abounded that the Hawks' Plan B if Howard goes to Houston is to execute a sign and trade with Houston and send Josh Smith to the Rockets for a package that would include Omer Asik from Houston.

Getting one of the top defensive centers and defensive rebounders in the league is a bad way to build a tanking team -- again, unless there are some tickets to Tahiti that would occupy the Hawks' best players for the entirety of the 2013-14 season.

Asik, Horford, a wing, Jenkins and Teague would have to be a playoff team in the East, right? And that doesn't take into account all the other oars in the water the Hawks have been putting out there in free agency to make that stronger.

GROUP QUESTION: Given the choice of continuing the process and building assets this season or tanking for a lottery entry for next year's draft, what do you want to see the Hawks do?