Even more from the national media horde that was in Las Vegas for the NBA Summer league.

Ever wonder if national media types watched the Hawks during NBA Summer League and submitted opinions?

If you do, then you've probably already seen the gushing forth from NBC Sports on Dennis Schröder and you've memorized every inch of Mike Prada's epic Top 60 players opus.

Well, if you can't get enough opinion on the topics, we found a few more for you from around the nation.

First, there is Ben Golliver, submitting from SI.com, with his All-Summer League team w/honorable mentions and also those worth mentioning.

Yup, you-know-who made the team.

G - Dennis Schröder, Hawks: The 19-year-old German is the only 2013 draft pick (No. 17) to make our team. Schröder ran Atlanta's offense with an unselfish grace (he ranked second with 5.6 assists), and he started its defense with tenacious on-the-ball pressure. Schröder acts like a coach on the floor, demonstrating an understanding of his teammates' strengths and weaknesses. He also carries himself with a calm professionalism on and off the court, a personality honed during his two seasons playing in Germany. His length and defensive intensity have drawn comparisons to Rajon Rondo, and he looks ready to give the Hawks minutes if needed as a rookie.

I wrote earlier in our Prada piece reaction that, with all this hype around Dennis, it's going to be a letdown if he isn't able to be a part of this team's rotation early in the season.

Lucas Nogueira makes the Others Worth Mentioning section as does someone else. Someone who caught Rob Mahoney's writeup on the surprising players of the summer league:

Scott was a nondescript role player as a rookie for Atlanta last season, but the 6-8 forward wound up as one of the top scorers at summer league (18.6 points in five games) by way of his savvy shooting touch and heightened offensive responsibility. The 43rd pick in the 2012 draft won't be allowed to gun for points quite as much during the regular season. But by being able to put together some scoring runs, he could help a Hawks team undergoing a frontcourt overhaul.

Rob goes on to write three more paragraphs about Scott's possible role with the new Hawks frontcourt, which is a total of four paragraphs more than Scott has received outside the Hawks blogosphere and Virginia Pro-Watch efforts.

And well-earned, I must add. 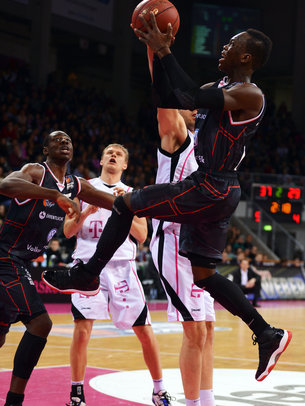 Mike Prada did the job nobody wanted but had to be done....and ranked the Top 60 rookies in the Summer League play.

Finally we get to the other draft pick from last year, and he didn't quite get the loving that Schröder, Scott and Nogueira received for their Vegas efforts.

From Zach Harper at CBS Sports:

John Jenkins, Atlanta Hawks: I really think Jenkins has a great shot of becoming one of, if notthe best shooter in the NBA in a couple of years. He has an incredible shooting stroke that looks both robotic and incredibly fluid at the same time. However, it's going to be hard for me to get people on that same wavelength if he's 37.8 percent of his shots (85 shots) and 28.9 percent of his 3-pointers.

Jenkins fell into the Disappointments category of Zach's recap and, while he did seem out of sorts in Vegas, especially as compared to even last summer, I don't know that any Hawk fan was terribly concerned with long-lasting effects of the performance.