The Atlanta Hawks continue their recruitment of possible starts and role players and reportedly added Nuggets wing Corey Brewer to their list.

Marc Stein of ESPN reported yesterday that Nuggets guard/forward Corey Brewer has some interest out there, including the Atlanta Hawks:

Word is Corey Brewer, on top looming sitdown w/Rockets, drawing interest from New Orleans and Atlanta as well. Also: Denver wants him back

Brewer has been around the league already in his brief career, having been drafted in the lottery by the Minnesota Timberwolves after playing a large role in back-to-back NCAA championships with the Florida Gators.

March 3, 2011: Signed as a free agent with the Dallas Mavericks.

December 13, 2011: Traded by the Dallas Mavericks with Rudy Fernandez to the Denver Nuggets for a 2016 2nd round draft pick.

After the Knicks indelicately waived him during the 2010-11 season, the Hawks didn't even feign interest in acquiring him, and the Mavericks signed him to a 3 year, approx 9 million dollar deal.

He had a good year last year for George Karl and interest has been there for the affable Brewer this offseason.

Looking at his stats, much like we did for Tyreke Evans, paints a bleak picture when comparing to what the Hawks reportedly want to do at the wings.

Then the advanced stats:

We can see from these stats that Corey can add two things on the floor, steals and defensive wins. However, while the steals % would have led the Hawks team last year, his defensive win shares would have placed him fifth.

I understand that he only played 24 minutes a game for the Nuggets and therefore couldn't accrue the same amount of win shares than if he played more, but his win shares rate wouldn't have placed him very high at all on the Hawks list, either.

While you could make the case that he plays the D part of the threes and D approach to wingplay, he fails at shooting the threes, where he is a career 30 percent shooter from there.

But wait! In an attempt to salvage a way to get Brewer on the team, we launch a tried and true weapon: The Shot Chart. 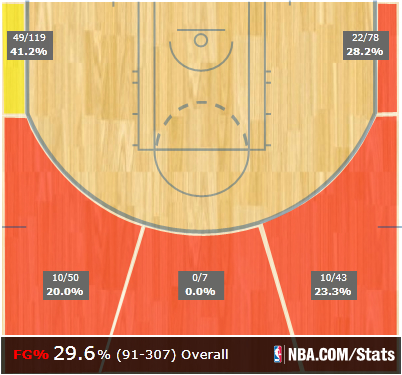 There is a lot of blood on the floor, for sure. But look at the glimmer of hope -- the corner three. From the left corner, Brewer is a little bit better than league average. However, I am obliged to tell you that this was the first year he was over the league average from that corner in the last three seasons.

Maybe, as his stats show, he is finally forming into a solid, slightly above replacement value player who can play D, hit a corner three and be an effective part of a playoff rotation.

Or, we might have seen an outlier season and there is a regression coming from even this modest success as a pro.

So why I am so interested in Corey Brewer being a Hawk?

First, he hustles -- a more talented version of Mario "Flubber" West. He is all over the place, scurrying around defensively, etc.

Secondly, he has a tremendous attitude and a hard work ethic, always desirable for a team.

Lastly, and probably the most impactful, I watched as he, along with can't-go-wrong Al Horford, won those two titles for my alma mater, Florida, and did it by knocking down big shots, finishing above the rim and stealing balls like crazy hustling up from behind unsuspecting opponents.

Pairing him with Horford again would be a treat for myself and other who appreciate where he went to school as well as the other attributes mentioned.

But an honest analysis is that you have to strain your eyes pretty hard to make him fit on an efficient roster, given that he qualifies defensively, but is so horribly inefficient offensively. Maybe he fits what Coach Bud and Danny are trying to do, but I can't see dedicating even the modest 3 million/year he was getting on this last contract.

I hope I'm wrong -- it would be great to see the guy we nicknamed "The Drunken Dribbler" play on this team, because he'd be fun, for sure. I just don't think he'd be all that efficient.