Now that we've done it, and ESPN has done it, let's look at the rest of the NBA Draft Grades.

Share All sharing options for: NBA Draft Grades: NBA Roundup of draft grades for the Hawks

NBA Draft Grades are very subjective and are prone to ridiculousness. That's why we lift up our own draft grade as a statue to ultimate objectiveness and look at poor ESPN's draft grades as misguided and sad, but we love them anyway.

Now, on to the rest!

San Antonio - East. So, the Hawks drafted not one, but two foreign players in the first round? We all should have seen this coming, right? GM Danny Ferry and new coach Mike Budenholzer are clearly wasting no time putting their Spurs training to full use. Atlanta landed the ultimate "if he pans out, holy cow" big in Lucas "Bebe" Nogueira and a solid point guard in Dennis Schroeder. That pair offers a nice combination of intrigue and impact.

Ah, see....Ben gets it. He puts us on the Winners page and says it right: We wanted a Spurs type approach in the ATL and that's exactly what we got.

No team has more rebuilding to do this offseason than the Hawks, who entered the offseason with three players locked into contracts for next year. Nogueira and Schroeder were the top two foreign prospects in the draft. Both have tremendous athleticism and could play next year, at least in limited roles. Muscala is one of the most skilled big men in the draft. Neto is a starter in Spain's top league. Cunningham, the No. 24 pick in last year's draft, was more or less handed to them by the cost-cutting Mavericks and could be useful. All five of these players could be solid bench players for years to come. That's impressive, something no other team came away from this draft able to say. 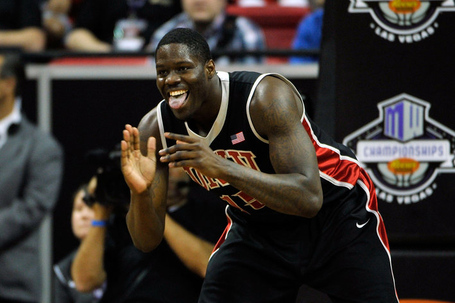 This...is totally awesome. See all the grades for upside, fit and immediate help with eye-popping splendor

Atlanta Hawks: They had multiple first round picks, and wound up trading back at one point and then took Lucas Nogueira who wasn't going to go that high anyway. He's big, which is great, but there's still a huge gap there in terms of fit with his rawness. Taking Dennis Schroeder was a terrific move, but you still feel like they could have done more with their assets.

So Matt had us under his Losers area and I can't really understand what we should have done. We didn't trade back, we moved up to 16. In fact, we traded the 18th pick for the 16th and the 44th. Who else did that kind of magic last night?

Sticking with an international theme this draft, the Atlanta Hawks took the German point guard with an explosive first step and incredible athleticism.

Dennis Schroeder is ready to play in the NBA right away, and he makes Jeff Teague expendable. Given his jump-shooting prowess and quickness, he'll form a potent pick-and-roll tandem with Al Horford.

I see a lot of Rajon Rondo in this young floor general. If anything, he's more athletic than the All-Star Celtic. Schroeder may not have quite the same floor vision, but he's a better scorer already.

Atlanta fans may not be too familiar with the No. 17 pick, but they'll fall in love with him quickly.

Adam lays it out for all three picks and does a nice job. But even he stumbled at the awesome concept of the Hawks trading up, yet getting more instead of paying more (Nogueira pick).