We wake from the rubble of last night's crazy, crazy draft to find that Danny Ferry and company underwhelmed Chad Ford.

The NBA Draft grades are in for ESPN's Chad Ford (Insider Required, but the Hawks analysis is above the login block) and despite the fact that the Hawks pulled the 14th, 15th and 33rd best player from Chad's board with the 16th, 17th and 44th picks, Chad thought the night was rather plain.

Analysis: The Hawks are probably losing a chunk of their rotation this offseason and didn't get much help in the draft for next season -- it may be several years before we can accurately gauge how well the Hawks did.

Nogueira and Schroeder have upside. Nogueria can develop into an effective rim protector and Schroeder is quick, athletic and tenacious on both ends. But both players appear to be several years away from being serious contributors at the NBA level.

Muscala is the opposite of Nogueira and Schroeder. He's a polished college veteran who might be the most ready to play now of the Hawks' draft picks. Neto is a good player as well, but he's unlikely to come over to the NBA this year.

So this is about the Hawks, who obviously are in a transition period, not get enough this year help. Looks like Ford completely abandons any reason he had Nogueira 14th or Schroeder 15th in the draft without offering any opinion on who they should have drafted their instead.

Looking at Chad's Tiers post, I see that all three Hawks picks were on Tier 5 and that there were no Tier 4 picks and above for Atlanta to take. Also, Nogueira is called out for having received a number of Tier 4 votes.

Looking down through the other teams reveals inconsistency and the usual garbage when we see how the Hawks are judged. 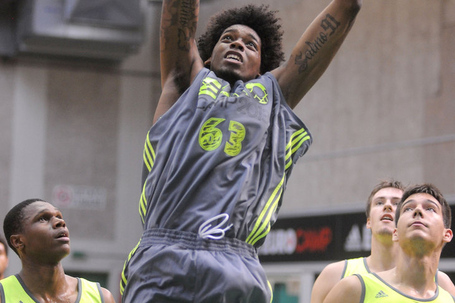 Jason Walker lays out what he thought of the Hawks draft

Boston got a B+ for taking their own Tier 5 player, Kelly Olynyk and little else.

Golden State got a B- for buying into the first round at 30 (eventually), and then selecting a guy there (Nemanja Nedovic) who was ranked 51st on his big board.

In yet another attempt to troll the Hawks fanbase, the Nets used one pick and took Duke's Mason Plumlee and got a B. Ouch.

Ford seemed to have a perception about how the Hawks should draft and then, when the Hawks had broader vision than the 2013-2014 season, Ford dumped all over it, giving better grades to teams that didn't get good value with their picks than a team in Atlanta that got Tier 5 value, and better Big Board value, with all three picks.

Also, Ford misses the Hawks trading the 47th pick, Raul Neto to Utah for a 2015 second round pick.

I stand by my Hawks grade for this draft -- It just looks like Ford missed the mark here.