Chad Ford updates his latest mock draft and has the Atlanta Hawks drafting small forwards Giannis Antetokounmpo and Shabazz Muhammad with the No. 17 and 18 picks in the upcoming NBA Draft.

ESPN's Chad Ford released his Mock Draft 6.0 Tuesday afternoon (Insider required) and shifts gears on the prediction for Atlanta, having the Hawks go all Billy Knight on the Bird Watchers and taking wingmen Giannis Antetokounmpo and Shabazz Muhammad with their two picks.

While it seems odd the Hawks would elect to forego big men with the two picks, Ford says that he keeps hearing Giannis' name in concert with the Hawks and feels like the Muhammad slide has to end at some point:

There's a point where a player's reward outweighs the risk. I'm not sure where Muhammad's floor is, but it has to be pretty close. Yes, there are flaws in his game, but at some point you can't ignore his scoring abilities.

Will the Hawks trade up in the draft? 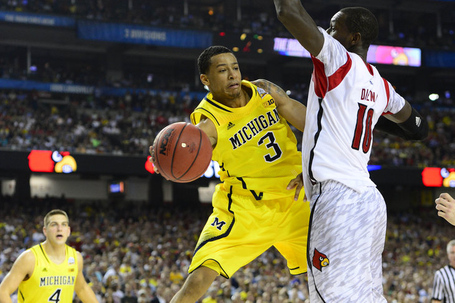 Reports are that the Hawks are trying to trade up in the draft -- but who would be the target if they are?

The Hawks did recently bring in Muhammad for a workout, as his stock has slipped out of the top 10 after being forecasted to Minnesota for most of the draft season. Shabazz is all scorer from the wing and likely has the fastest vertical of any of the draftees, leading to his good offensive rebounding reputation.

The buzz on Giannis had died down a little over the past weeks since we made him the (then) surprise selection of the Blogger Mock Draft over on the mother ship, but if nobody takes him higher to stash him overseas, I can still see the Hawks taking a chance on him, especially if they are getting a solid rotation player with the other pick.

Exit Question: I think I know the answers, but what do you think about the Hawks snagging two wings and no bigs with these two picks?