Reports are that the Hawks are trying to trade up in the draft -- but who would be the target if they are?

Amidst the NBA Draft rumors that suggest the Hawks are snooping around the options of trading up in this draft are the questions of who they would be targeting if they do.

First, the report from Marc Spears of Y! Sports that started all the talk:

The Hawks have the 17th and 18th first-round selections and the 47th overall in the second round. Atlanta has had trade conversations with at least one team picking in the top five, a source said.

Now, the questions of who they would target. My opinions (with SBNation draft profile links in the names):

Oladipo is an explosive athlete who defends, finishes, etc, etc, etc. He is a younger version of one of the max free agents this summer, Andre Iguodala.

However, chances are that Oladipo, who had been seen in some mocks around the #5 pick, is more likely to land in the top 3 -- so the Hawks wouldn't be guaranteed he would be there.

Len is a legit 7-footer that would allow Al Horford to move to the power forward position more often. But despite being more well rounded offensively than the Hawks choices at the 17/18 slots, he may not be different enough to be worthy of moving up to get him.

Burke and Michael Carter-Williams are the two lottery point guards in this draft, and the two have been jockeyed back and forth in GM's minds as to whom is better. 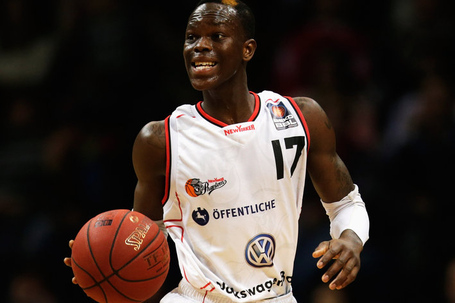 International scouting has come full circle in the last decade, with relative unknowns sneaking into the late first round. We discuss the unique situations of Giannis Adetokunbo, Dennis Schroeder (pictured) and others.

These are the three names that we consider to be the most likely targets based on fit and needs for the Hawks. But Oladipo is unlikely to be there at 5, and Len is being talked about as potentially the #1 pick now to Cleveland, it leaves the likelyhood of the Hawks targeting someone around the 5 slot to be Burke.

Burke's run as the Michigan Wolverine's floor general was eye-catching. His leadership, scoring and playmaking reminded many of Chris Paul's similar leadership of his Wake Forest teams.

Burke is visually similar to Paul, while not being completely statistically equal, many of the skill sets are the same. Burke's defense has been in question, but his playmaking has not. To trade up for Burke would be announcing that he is the point guard of the next Hawks playoff team, whenever that may be.

Jeff Teague holds the title of point guard of the last Hawks playoff team, but is a restricted free agent this summer. While the team will surely offer a qualifying offer to Teague, thus keeping him restricted and protecting right of first refusal, we believe he hasn't shown the mental approach to the position to convince Hawks management that he would be worthy of a 5 year, 10M+ per year commitment.

The team is NOT likely to be targeting Shabazz Muhammed, who was linked in the article. The Hawks have him in the mix for 17/18 picks, along with Jamaal Franklin, Gorgui Dieng and Mason Plumlee. Also important to note that trading up has only been discussed as a pure transfer of draft picks, likely to also include pick #47 in the second round.

Al Horford is not being discussed as a possible trade piece here, America.

Exit Question: Should the Hawks move up? And if they do, who would you want to target with that pick?