NBA Draft ESPN: John Jenkins should have been drafted higher

Where one of ESPN's basketball experts compares a consensus lottery pick this year to last year's #23 pick.

Share All sharing options for: NBA Draft ESPN: John Jenkins should have been drafted higher

In one of the latest ESPN 5-on-5 series, (Insider required) where five NBA analysts get asked five questions about a topic, the subject was NBA comparisons for some of the lottery-type picks in this year's draft.

Among the panel, David Thorpe, who specializes in tracking rookie work for the site (Rookie Watch), but generally is a part of the stable of guys who watch basketball and write for ESPN.

Why, Peachtree Hoops, Why? 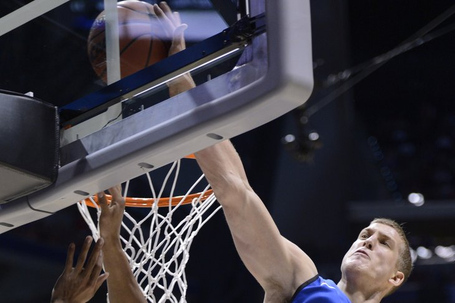 Read why we selected the players we did in the 2013 NBA Mock Draft at SBNation. An 18 year old Greek playing in a rec league and Peachtree Hoops Community Enemy #1? WHYYYY?

The first player discussed was Lehigh's CJ McCollum, a player routinely forecasted to go in the lottery. First up was Thorpe and this was his commentary:

I see a lot of John Jenkins in him. And that's not the knock you think it is -- Jenkins was drafted too low last year. McCollum looks as if he can be an excellent shooter, and though his wingspan is good, I prefer to just consider arm length, and that looks to be excellent. Great shooters who can be solid defenders are so valuable -- you can see that by watching the Spurs.

I'll admit, I was surprised when the Hawks snagged Jenkins at 23 last year, but was quickly encouraged by knowing he could shoot -- having seen it in SEC play. When we got a look at him in summer league, with the Dan Marino Brand quick release, I was good with it.

But Thorpe thinks he was drafted too low? Wow. I don't remember that on draft night, though Jenkins was always mentioned as being the best shooter in the draft. In fact, Thorpe's colleague at ESPN, Chad Ford, had Jenkins ranked 37th on his Big Board, and projected him to go to Cleveland at #33 in his last mock draft.

Here is the list of the draftees in the first round:

Where do you think Jenkins should have been drafted -- Do you agree with Thorpe yet?

Look over that list and tell me if you can see teams, if they had the chance to do it over, taking Jenkins higher?

I used advanced stats, ranked 'em by Win Shares and filtered all entries that didn't play at least 10 minutes per game last year as a rookie, but included rookie players that weren't even in last year's draft because, basically, I was too lazy to do that bit of editing. Sorry.

Still, Jenkins shows out well here, too, and maybe you start to see Thorpe's point.

Final point in Thorpe's favor for some readers who might think the guy is nuts -- He selected Gorgui Dieng for the Hawks in their Collaborative Mock Draft. (also Insider) -- a seemingly overwhelming site favorite for one of the Hawks' selections, so there's that.

Exit Question(s): Do you concur with Thorpe that Jenkins should have been drafted earlier? Where do you think he would be drafted in there were a re-do?