The Atlanta Hawks have a new head coach and coaching staff but there is still a ton of work left to be done starting with the NBA Draft on June 27.

Share All sharing options for: Offseason's biggest questions remain for the Atlanta Hawks

We are one week away from the NBA Draft and the Atlanta Hawks have already had a busy offseason replacing Larry Drew with Mike Budenholzer yet there is still work left to be done. So how did we get to this point? Here is a quick look back and a quick look forward at what is coming up.

After somewhat of a drawn out process, Danny Ferry settled on San Antonio Spurs assistant coach Mike Budenholzeras the next coach of the Atlanta Hawks replacing Larry Drew. Budenholzer was introduced on May 29 but stayed with the Spurs throughout the NBA Finals. Drew eventually landed the head coaching gig in Milwaukee. 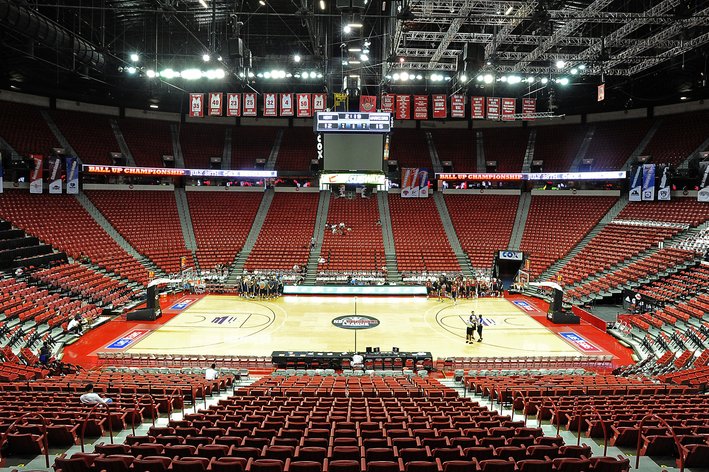 The Atlanta Hawks begin play in the 2013 Vegas Summer League on July 12 against the Los Angeles Clippers.

The Hawks hired former CSKA Moscow assistant coach Quin Snyder and former Los Angeles Lakers assistant Darvin Ham as assistant coaches. Kenny Atkinson was retained from Larry Drew's staff. Danny Ferry told the Atlanta Journal-Constitution that he expected the team to add at least one additional coach to the staff but that it might not be done until the end of July.

Currently the Atlanta Hawks have four picks in the June 27 Draft with a pair of picks in the first round and a pair of picks in the second. The team hasn't disclosed who they have worked out this season but a few of the participants have leaked out. The Hawks could go several different ways and there figures to be a number of big men that are projected to be available around the time Atlanta picks. Other names like Jamaal Franklin, Dennis Schroeder and Reggie Bullock have been mentioned as possibilities as well.

Another possibility is the Hawks taking a foreign player like Giannis Adetokunbo and leaving him overseas for at least another season. One advantage to this strategy is that the Hawks could recoup more salary cap savings and have more money to spend this summer on free agents. Its possible but highly unlikely that all four of Atlanta's draft picks will be on next season's roster.

No matter what direction Ferry decides to go in they hope to repeat the success of last season's draft that produced John Jenkins and Mike Scott who both look like they could be rotational players as early as next season.

The Hawks have between now and June 30 to issue qualifying offers to both of their restricted free agents, Jeff Teague and Ivan Johnson, or lose the right to match offers given to them by other teams. Giving Teague and or Johnson a qualifying offer won't affect Atlanta's pursuit of other free agents this summer. Should the Hawks need the extra cap space then they can pull the qualifying offer as long as it is done by July 23.

I previously touched on this topic and think it is virtual lock that the Hawks give Jeff Teague a qualifying offer. Ivan Johnson's situation could be a little trickier but since they have the ability to pull them back there isn't a lot of incentive not to go that route.

Free Agency opens on July 1 and the Atlanta Hawks will be major players with loads of cap room. The Hawks have just three players with guaranteed contracts for next season so they will have the ability to go after top free agents like Dwight Howard, Chris Paul or maybe even both. Other names that Atlanta could be interested in incloud Andre Iguodala, Nikola Pekovic, Andrew Bynum, and Tiago Splitter.

The Hawks will also have to make decisions on a number of its own free agents like Josh Smith, Kyle Korver, Zaza Pachulia as well as Jeff Teague and Ivan Johnson who are restricted. Most are predicting that Smith won't return to Atlanta but depending on what else happens, the Hawks could re-sign him or help facilitate a sign and trade deal with another team. Korver figures to draw a lot of attention on the open market and Pachulia is coming off of Achilles surgery.

Free agency this offseason will involve a number of moving parts where one move could set off a chain reaction of other events. Expect Ferry to be one of the general managers that makes contact with both Paul and Howard as soon as free agency opens and tries to sell them on the idea of playing together in Atlanta. If there were to be a mutual interest then the Hawks would move quickly to renounce the rights to its on free agents in an effort to clear as much cap room as possible.

The Hawks are one of 22 teams that will participate in the Vegas Summer League from July 12-22. For the first time in a while, Atlanta will have a number of their own players in Vegas rather than a team full of free agents. John Jenkins, Mike Scott and Shelvin Mack are all expected to suit up as well as any players taken by the club in the 2013 Draft.

There will be a new format to summer league this season with teams playing three preliminary round games before advancing to a championship style tournament. Atlanta has yet to announce who will coach the team's summer league entry but that along with the roster should be settled on sometime after the draft.